Centipede Demon is a Boss in Dark Souls.

This demon is a large bug like creature which defends the path to Lost Izalith. Its arms and tail are separate living centipedes. The boss has a tendency to stand on the lava after walking through the fog gate and repeatedly use his reaching attack. For someone who is not in possession of the Orange Charred Ring or ranged attacks, this can be extremely annoying.

The Centipede Demon swings from the left side, capable of breaking your block if it hits directly. To avoid this just walk to the side with your shield up to lessen the blow.

The Centipede Demon spins and swings his tail at you, similar to the right swing, however this one follows more of a sweeping motion. Counter by rolling out of range, or blocking if you are capable.

The Centipede Demon jumps up and slam down with you as the target, just block and you'll be fine. Uses this attack when you are either under Centipede or very close to him.

He grabs you and inserts you into his toothy chest, which you can escape with no damage done by tapping L1/R1 in order. However if you don't, it does moderate damage. To avoid, stay away from directly in front of him at close quarters, or roll out of the way when you see him reach in for the grab.

The Centipede Demon rarely goes full pokemon, but when it does, multiple balls of lava home in at you in rapid succession, and deals decent enough damage to warrant a warning.

First and Foremost, run over the lava, around the corner on the right. Hidden behind that corner is a large field where you can properly fight him.

One method to make this fight easier is to cut off his tail from the beginning. If you can lure him to stand over you, you can hit him and be relatively safe, keeping up your block when he motions for an attack, just in case. His tail has a mind of its own, and can be like fighting two enemies, so be sure to take care of it early on. The Centipede will become crazy after the tail cutting and will run through walls but you must stay behind his back feet. The tail will grow back so cut it off again.

Dodge his arm extension move once he gets close, and run up to him.

The Centipede Demon will use AoE attack when its health is low, so make sure to pay extra attention to his attacks when his health dips. Using a shield with decent stability will improve your survival odds.

If you're standing close to the wall near the entrance to the fight and it grabs you to perform its maul attack, he has a chance to jump through the ceiling and become stuck on the roof. If this occurs, walk towards to exit door and wait it out. He will eventually fall off into the game void and plummet to his death netting you the boss souls and Orange Charred Ring.

Similarly, under the same circumstances, when he grabs you, he will munch on you, then fall through the floor and die when he's done. If the grab kills you, you will get all the souls/items and you won't have to fight him again. 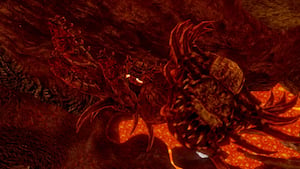 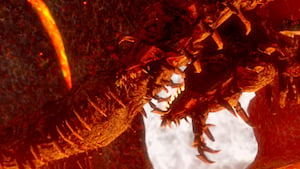 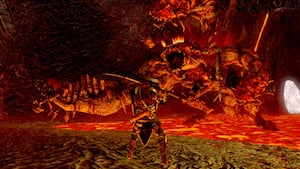