Chaos Witch Quelaag is a Boss in Dark Souls.

A half-woman, half-spider demon located in a lair near the bottom of Blighttown. One of the Witch of Izalith's daughters, transformed into a monster by the Flames of Chaos. Her notable siblings are "The Fair Lady" and Ceaseless Discharge. She guards the second Bell of Awakening, and the entrance to her sister's domain.

It may be worth knowing that she only fought you to protect her sister, who is in a permanent coma-like state So when you enter her sister's domain and talk to her, she thinks you are her sister, which is later revealed if you talk to her whilst wearing the Old Witch's Ring.

Quelaag slashes in either direction with her sword. Block or roll to avoid these. These slashes are also angled outwards from her human portion and therefore typically miss if you are very close to the spider's head. Not a huge threat.

This attack extends straight over the spider's head and has much more range than expected. It usually follows her two close range fire slash attacks, but occasionally will be used by itself. If you are in front of her when she starts winding up for it, either roll backwards or to the side several times, or if you are close enough, simply walk forward, to the right.

The initial stab can also be mostly deflected if you are blocking with a high fire resistance shield, but you will still want to get out of the way of the attack as soon as possible. Can be a significant threat.

When she pats the spider's head or the spider looks like regurgitating, it's preparing for this attack. She will spit lava on the ground, in an arc around her, leaving pools of molten magma that stagger you and set you on fire, making it difficult to escape the lava once you are trapped in it.

Alternatively, if you are far enough away she may shoot 4-5 balls of lava at you. The animation on this attack can be deceptive, as the actual lava pools often appear farther out from her than where it appeared she was spraying them. These attacks are slow to execute and provide a good opportunity to strafe around to her side and land several melee attacks.

If she pauses while still some distance from you, watch out and back up! The spider will leap towards you, spitting lava simultaneously. It's very easy to get knocked back into the lava it spits with this attack, if you don't back up far enough. Trying to dodge to the sides is very difficult to do successfully. A better tactic can be to immediately start strafing to one side while she is in midair, as she cannot correct her flightpath once airborne. With a little practice, you should end up beside her and behind her lava spray, giving you another opportunity to land some hits.

She pauses and stomps on one side or the other with her spider legs, causing small damage that is easily dodged or blocked by a shield. The only thing to watch out for is not letting her legs strike you on the head from above, as this can circumvent your shield to knock you down and do more damage. Should not be a significant threat.

On rare occasions, the spider's large abdomen will start to shake and she will spray small clouds of reddish-purple energy around and behind herself in a rough cone shape, similar to but different from, her fire wave attack. Usually occurs when repeatedly attacking her abdomen directly from behind.

Given the rarity of this attack and the fact that anyone behind her in the primary danger zone will not see the windup for it, it can be a real surprise to anyone running up behind her. It must be blocked or dodged at the risk of very serious damage.

This is her most dangerous attack. Whenever she bends forward and reaches down the sides of the spider's head with her arms she is preparing her large 360 degree AoE attack. Back up as far as you can immediately, while keeping your shield toward her, as this attack has a surprisingly large range, and can either kill players outright or severely wound them and knock them into nearby lava pools.

Melee combatants should get in the habit of attacking her legs rather than her head or body, to give themselves that much more of a cushion of space to escape her fire wave attack, when retreating. She has also been known to spam this attack 2-3 times in a row, which is particularly dangerous if you are close to a wall or otherwise unable to retreat. Major threat!

Stay to her front sides, waiting for her to spew lava so that you have time to do some damage. She dramatically telegraphs her moves so after a few attempts, you'll understand and get used to them. It is also important to note that:

As soon as you enter the boss arena, move; get out of the entrance area as Quelaag may leap or charge on the character, often resulting in the player becoming pinned near the entrance and leaving them unable to avoid her attacks. It is generally easier to focus on attacking her legs rather than her body, as this allows you to retreat more quickly and also avoid getting trapped between her legs and her body when she starts turning or jumps.

It is also possible to dodge all three of her sword attacks if you time it right. Just make sure to dodge to your right for the first two attacks, otherwise they'll both hit you. Simply walk forward and to the right to avoid the thrust attack; you can take advantage of that moment to clobber her with a strong attack. Typically she'll jump back after that; if she doesn't, there's a good chance she's about to use her Fire Wave attack, so back up quickly and block (which will absorb some of the damage if you don't get clear far enough).

Making her spit lava pools near the sides of the room drastically gives melee players more space in the middle of the room, making it easier to avoid her AoE attacks and block/dodge. Be sure to switch out of targeting her, when appropriate, as her attacks may put you in a tight situation and you may be forced to flee. Also be careful that she doesn't use the Lava Rush attack while getting close to you.

Try aiming for fire and physical resistance. A shield like the Black Knight Shield, should do the trick, while a fire/physical resistance-focused armor can be utilized, as this helps stop much of the damage from her fire AoE attack. The Flash Sweat pyromancy is also extremely helpful both against her direct attacks and in case you get knocked into her lava pools, but may require re-application during the fight. A strong weapon (recommended 180 min) can do be effective against her as her health drops relatively quickly.

As soon as the fight starts run to the stairs that Quelaag comes down from. To the left of them, is a small walkway that goes up; stand in there and shoot her to death, making sure to target her human half. It is possible that she may still use the AoE blast or spit lava at you, but generally she cannot reach you if you keep staggering her with arrows.

Attacking Quelaag’s upper body can stagger her, and one of – if not THE – easiest weapons to achieve that with is Great Scythe. Its 1H R1 (one-handed light attack) is a downward slash that covers a huge vertical arc almost reaching up to Quelaag’s head. Its moveset is also very cost efficient stamina-wise, enabling every build capable of one-handing it to exploit its strength. The best way to hit Quelaag with this method is standing directly in front of her, swinging the scythe before she has time to attack. Your next attack needs to hit her after she has fully recovered from her stagger, meaning you will have to push R1 just before the end of her recovery. With correct timing, you can easily stun-lock her to death.

For those having trouble with Quelaag, one way in which the fight can be made easier is to go into human form while in the swamps at the bottom of Blighttown. An NPC dark phantom called Maneater Mildred will invade - her reasonably slow attacks and lack of armor make her a fairly simple foe. Once she has been dealt with, her summon sign will become available outside the fog gate leading to Quelaag for those still in human form. She is an effective meat shield and seems oddly resistant to Quelaag's lava and fire wave attack, and helps further by dishing out a not inconsiderable amount of damage. As such, Mildred's help can prove invaluable to those otherwise having difficulty.

Player summons from the nearby bonfire at the bottom of Blighttown can also make this fight easier than even a typical multiplayer boss fight. Quelaag's AI can be unstable when she has multiple foes to choose from, and she often abandons pursuit of one target when another injures her (also allowing players to rescue one another if one gets trapped by her).

Given her fairly slow turn speed and the long windup of most of her attacks, it is easy to trap her in her own aggro cycle by having one player attack her a few times and then retreat so that another player may then attack her from her rear or sides, usually causing her to try to turn around and go after the latest attacker, which then leaves her open to other attacks by the initial attacker and so on. This is particularly effective if one or more foes is using ranged spells or miracles such as lightning spears, as multiple close melee attackers remain vulnerable to her powerful fire wave attack, which has a 360 degree area of effect and a large radius.

By effectively resetting Quelaag's focus by having other players hurt her whenever she starts concentrating on a particular player, it is not uncommon to kill her without anyone taking any damage. One side effect of this tactic is that Quelaag may get so rattled that she ends up boxing herself in with lava spits in a circle around her. Melee characters should consider bringing a ranged weapon such as a bow or throwing daggers to help maintain aggro on her while waiting for the lava moat to start disappearing. 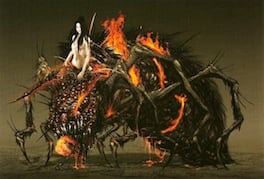 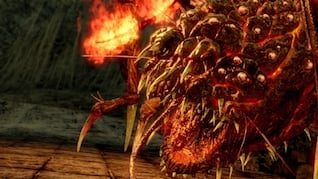 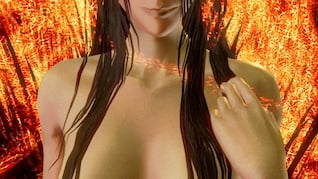 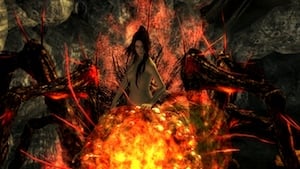 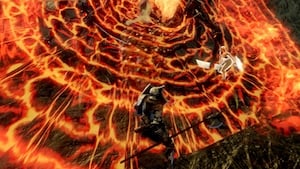 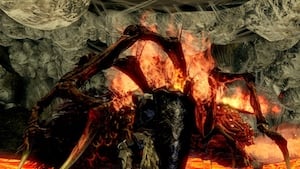