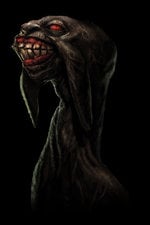 After you have rung both Bells of Awakening, in the Undead Parish and Quelaag's Domain, the Kingseeker Frampt appears where there used to be water in the Firelink Shrine.