Firelink Shrine is the player's first destination in Dark Souls and Dark Souls Remastered. This ancient and crumbling shrine is used as a gathering hub and safe haven for many trainers, merchants and other story related characters. This central bonfire will be visited often, since it is also a crossroads for many regions and shortcuts.

The first time you come here will be immediately following your escape from the Northern Undead Asylum - you'll be dropped beside a bonfire by the Giant Crow that picked you up at the end of the cutscene. From here there are many places you can go right from the beginning of the game, and even more if you chose the Master Key as your gift during the character creation process.

Turn around and you'll see an aqueduct in the distance, which leads to Undead Burg.

Sat next to the bonfire is a Crestfallen Warrior (He's typical of the type of NPC you'll meet in this game - talking in deliberately extraneous language and giving little in the way of hints as to what you should do next.) To the left of him you'll find stairs leading down to New Londo Ruins (and possibly Valley of Drakes, Blighttown and Darkroot Basin if you have the Master Key and a death wish). Anastacia of Astora is also found down these stairs behind some bars, but she can't talk and doesn't serve a purpose right now.

In the doorway to the right of the Crestfallen Warrior you'll find three more doorways leading into some ruins: the one on the left leads to The Catacombs via a currently flooded ruin and a graveyard, the one in the middle leads to Petrus of Thorolund (a Miracle trainer and leader of the Way of White covenant). The right doorway takes you to can find some firebombs at the end of the passage. 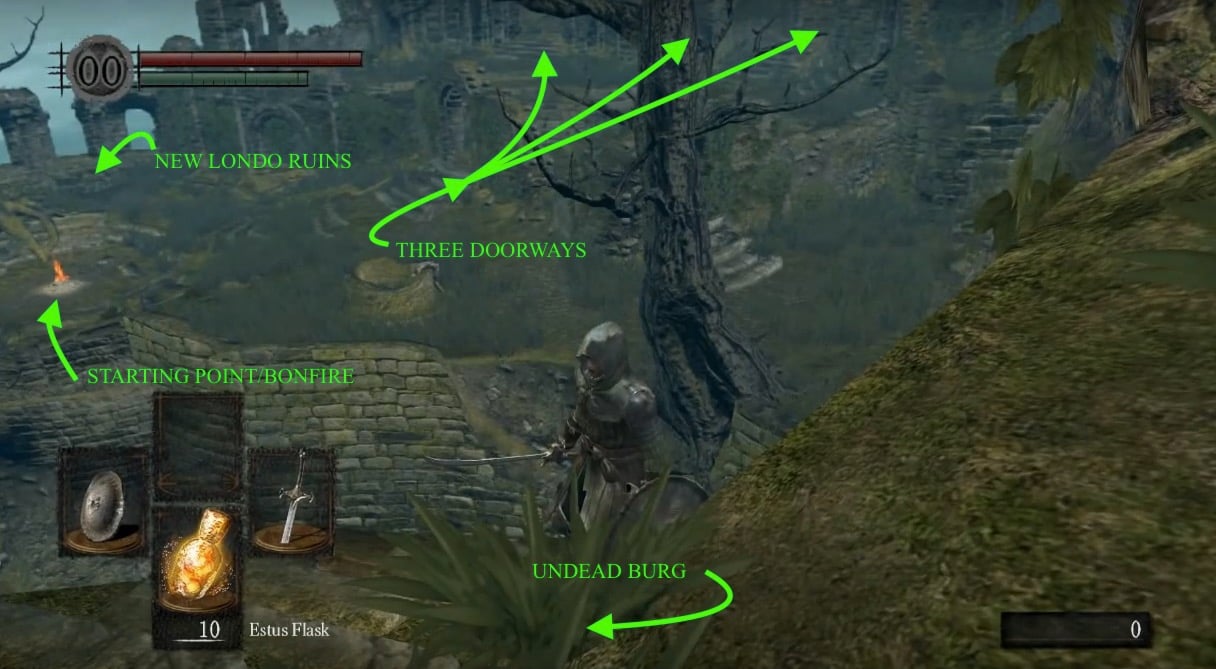 Upon first arriving you don't have any real alternatives other than to proceed to Undead Burg, since the enemies in all the other reachable areas are too challenging to deal with initially. However before proceeding to Undead Burg, there are plenty of useful items to collect here in Firelink Shrine.

The Journey to Undead Burg

Leap - If you head back down the stairs to the lower spot, there is an Undead Soldier (sword)  with a shield. You'll see an item on the far side of lower level of the aqueduct. You can get it by jumping from where you encountered the shielded undead, onto the aqueduct. Once on the aqueduct, carefully make your way around the pillars until you reach the other side where you can pick up the Ring of Sacrifice. Make your way back around the pillars and jump back onto the cliff where you previously jumped from. 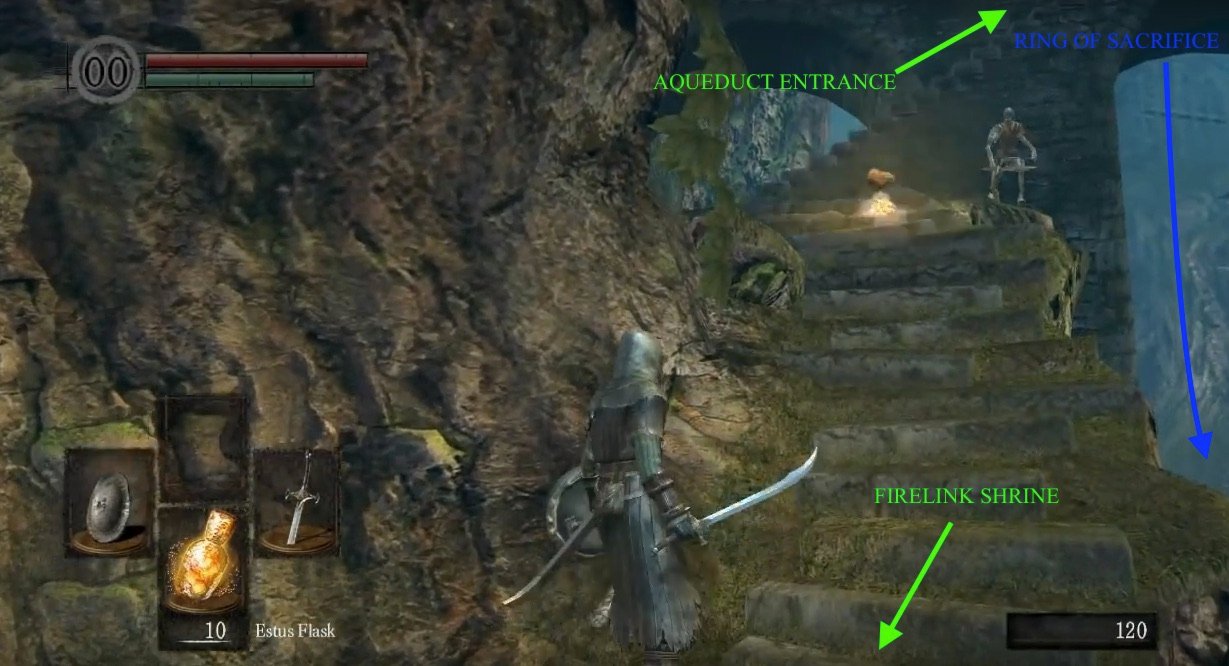 Reaching The Burg - Continue up the two fights of stairs to find an entrance into the aqueduct, and a Soul of a Lost Undead at the end of the ledge. Once in the aqueduct, on your left you will find a dead end with Sewer Rat will be scurrying next to a corpse with yet another Soul of a Lost Undead. On the right is a corridor that you can follow and continue up the stairs on the left to access the Upper Undead Burg. You may notice a locked gate at the end of the corridor before heading up, which is unlockable later from Lower Undead Burg.

Open Chest
Inside the flooded ruin is an open chest, beside a statue of a maiden. Should the player be so unfortunate to drop a game breaking item, it can be retrieved from the chest, which will then be closed with the item inside.