Sanctuary Garden is a special DLC Location in Dark Souls, and included in the base game with Dark Souls Remastered. An area similar to Undead Burg, it is only accessible after the Player has defeated Knight Artorias and is crowded with hostile Oolacile Residents and Oolacile Sorceress. Though quite linear, the trick of that map is its high falling range and an enemy placing on hideous places. As the bonfire is close to many shortcuts, and the way to the next one might become a bit long don't be afraid to light it up to 15 or 20 Estus.

Threeway - After having defeated Artorias the Abysswalker, you will notice the fog gate disperse to reveal a large door you can proceed through. Passing through the door leads to an open area with a bonfire, however if you walk up the stairs on the right you'll find the PvP-Arena-Section called the Battle of Stoicism, whilst heading up the left stairs - behind which, you can find a Soul of a Hero - will lead to a locked chamber where you will hear some clicking noises; behind that locked door, you will find Hawkeye Gough. However, this room is inaccessible until you obtain the Crest Key in the lower sections of the township. So for now, head to the bonfire and rest up. 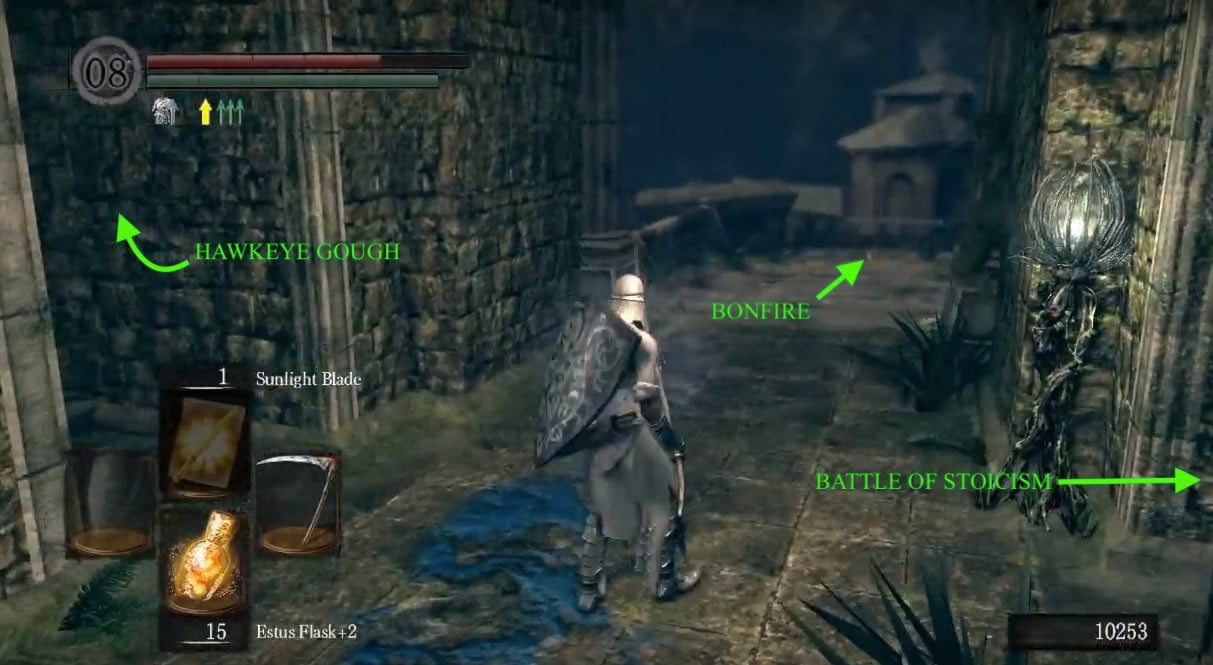 A Woman Scorned - After having rested and lit, you may return to the arena you defeated Artorias, to find Ciaran mourning his death. You can choose to talk to her and give her Artorias' soul in return for her weapons, or kill her to keep the soul, and obtain her armor and weapons. If you wish to kill her, prepare for a tough fight full of toxin, bleed and a possible lack of Estus due to her Lloyds talismans.

Meeting The Locals - Continuing down past the stairs on the left of bonfire, you're going to want to have a light source to obtain some goodies down here. After passing the first flight you'll find an Oolacile Resident on the right; while these buggers are fast on their attacks and can deal a decent amount of punishment, they are very squishy. After the first encounter, four more await on the next level; you should approach them like any other group of enemies on this game, one at a time. Before heading all the way down the steps, find a Large Soul of a Proud Knight on a roof to your left. In the pavilion on the left, there is another hole in the ground, marking the lower city shortcut - we'll unlock this later. Pass it and continue down the stairs to find another two Oolacile Residents.

Continue down the steps but before descending all the way, here's a things you should know about the new enemy ahead: 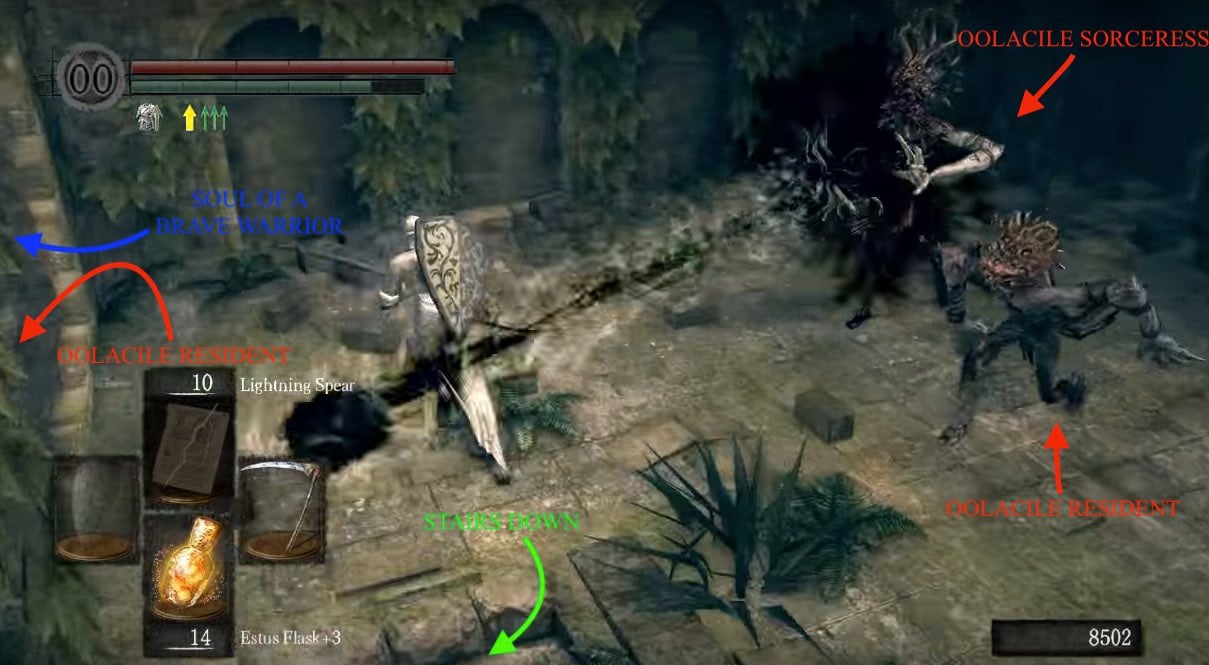 Right Way - Continue down the stairs and there will be a straight route of stairs going down, and a route heading right, around the building: Head right first, circling the building and following the stairs down, killing another Resident. Turning the corner will then show you an item on an unreachable ledge; jump to the ledge below it, circling that building as well, while ignoring the doorway into the other building for now. On one side you will find an Orange Guidance Soapstone that reads "Let there be Light", where you will have to use either Skull Lantern, Cast Light or the Sunlight Maggot to destroy an illusory wall hiding the Silver Pendant - which deflects dark magic. Then, return to the doorway and proceed through it only to be attacked by a Sorceress. Kill it and heal before heading down the stairs as your Sorceress problem will double down there. Once they've been dispatched, search the only closed chest to find your first dark spell - Dark Orb. Up the short steps in this room, you'll find another Sorceress around the corner, who by killing, will grant you an 'I'm Sorry' Carving. Climb all the stairs and head out the door ahead, and then up those stairs. 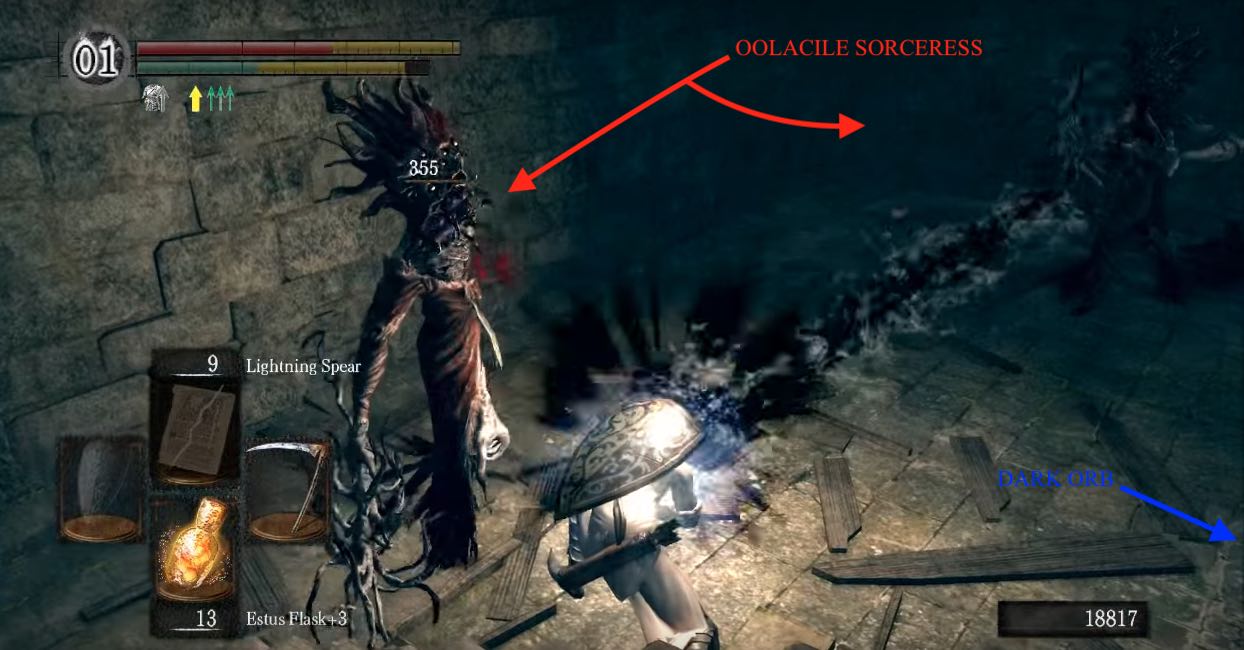 Atop, turn right, onto the wooden platform with the item we saw earlier - a Soul of a Brave Warrior - then drop back to the other side. Head up again until you arrive at the top, and head straight down instead this time. Down these stairs you will come across a narrow wooden walkway, holding a Resident, leading to a towards a Mimic holding a 'Very Good!' Carving.

Chester Not Nice - If you are in human form, you will also be invaded by Marvelous Chester on your way down the stairs. Continue down the stairs ahead, into tower and down the spiral staircase -notice the roof to your left: on its backside a Crystal Lizard will spawn, so get over and kill it by reloading. At the bottom you'll find a thin walkway with a Resident in the middle, and a Sorceress at the end; what you may not see, is the Resident hiding to your right. Kill him, then lure the one in the middle out. When they're dealt with, rush the Sorceress, then head down the stairs here.

- You'll find yourself in a hallway and immediately dashed by a Resident. Head out the door on the right, and immediately prepare to engage another Resident on the right. Pick up the item - Rubbish - and see another Resident drop down. Head down the stairs to find a Resident and a Sorceress directly below the mid point of the stairs. Kill these two first, without drawing the attention of the other bunch, in the next room. Drop down and pull each of them one at a time; there should be about 5 of them. If you're confident with your range ability, you can take the second Sorceress, on the balcony, out after; sometimes she falls from her balcony - which makes life easier for you. However if not, you can skip her for now, heading left to pick up the Soul of a Hero, then turn around and run into the doorway and up the stairs, to continue. 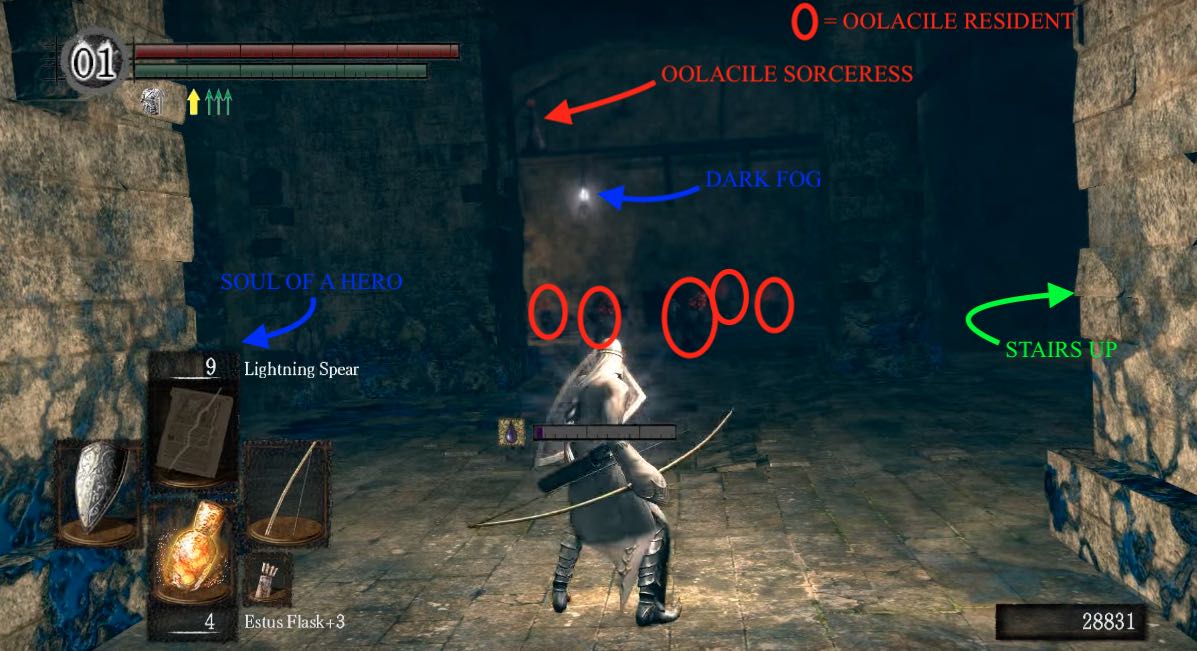 Access To Gough - Head up all the stairs, taking on a Resident along the way, until you come across another Orange Guidance Soapstone reading "try light"; this light illusionary wall is hiding a room with another chest holding Red Titanite Chunk. Head back into the previous room to find a wooden platform, branching out to your right. Use it to roll down to the balcony you see ahead, finding another Resident and an important Mimic - it holds the Crest Key. You should find another Resident at the fork, to the left of the Mimic. In this fork: 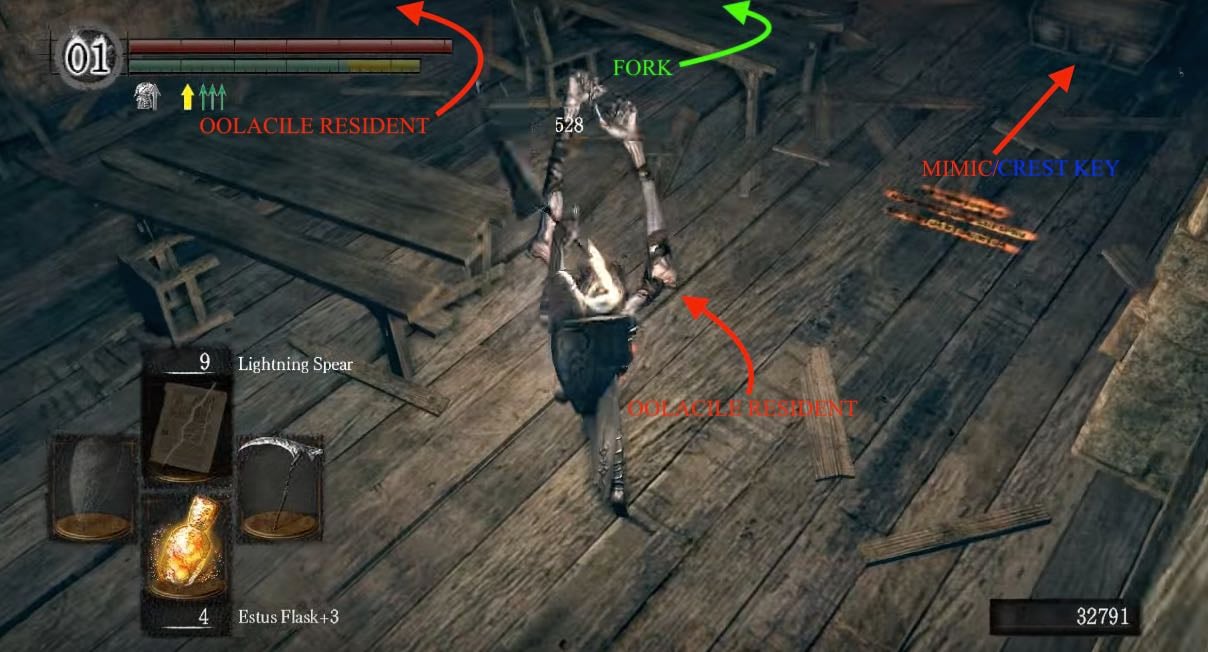 Outside Again - From this drop zone, head left and then into the first doorway you see, into the tower on the right Activate the plate to reveal a lift that acts as not just any shortcut, but the one we passed earlier. After doing so, head back down the lift and out the door, go straight towards the stairs. On them, you will spot two Sorceresses  and a Resident, but all is not what it seems. There are a total of two more Residents waiting for an ambush so use the appropriate strategy to pull the Residents first, or eliminate Sorceresses at range, then proceed to deal with the rest. There is a Soul of a Brave Warrior on a corpse in the corner on the left, where the ambush took place.

Into The Chasms - Before arriving at the Oolacile Dungeon Bonfire, an enemy stands in the way of your progress: the Chained Prisoner. Here are a few tips and notes on this unique enemy: 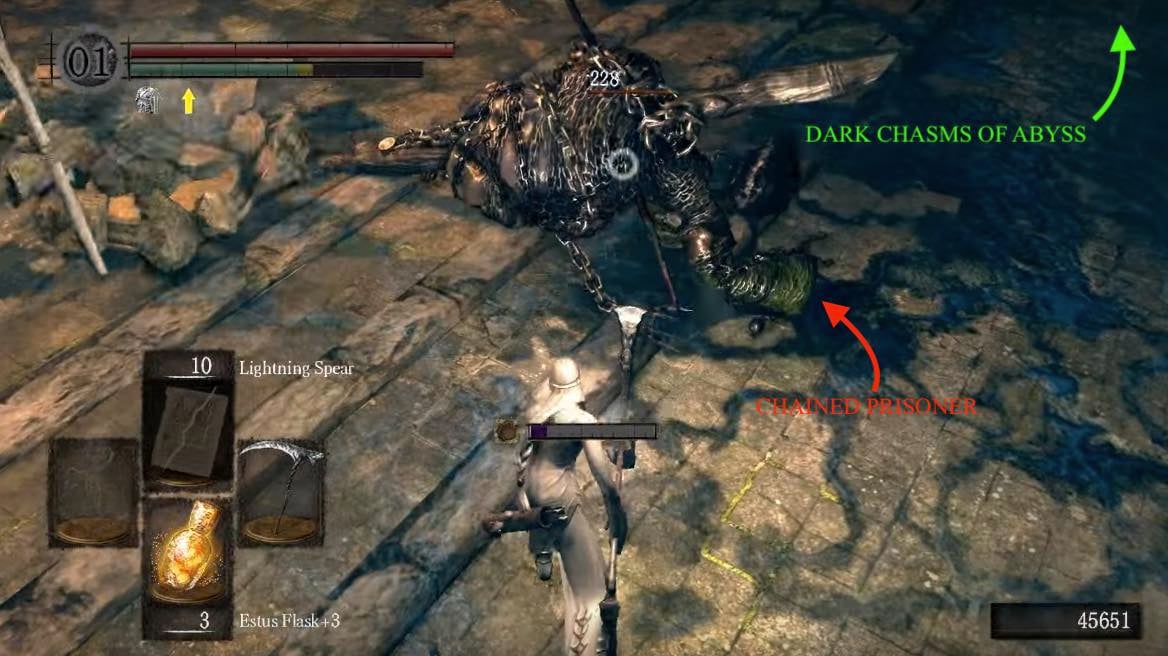 Enter the narrow passage behind him, activate the lift, and kill the Resident that comes up with it. Lighting the bonfire may be a good idea as you have to prepare for the Dark Chasm of the Abyss. 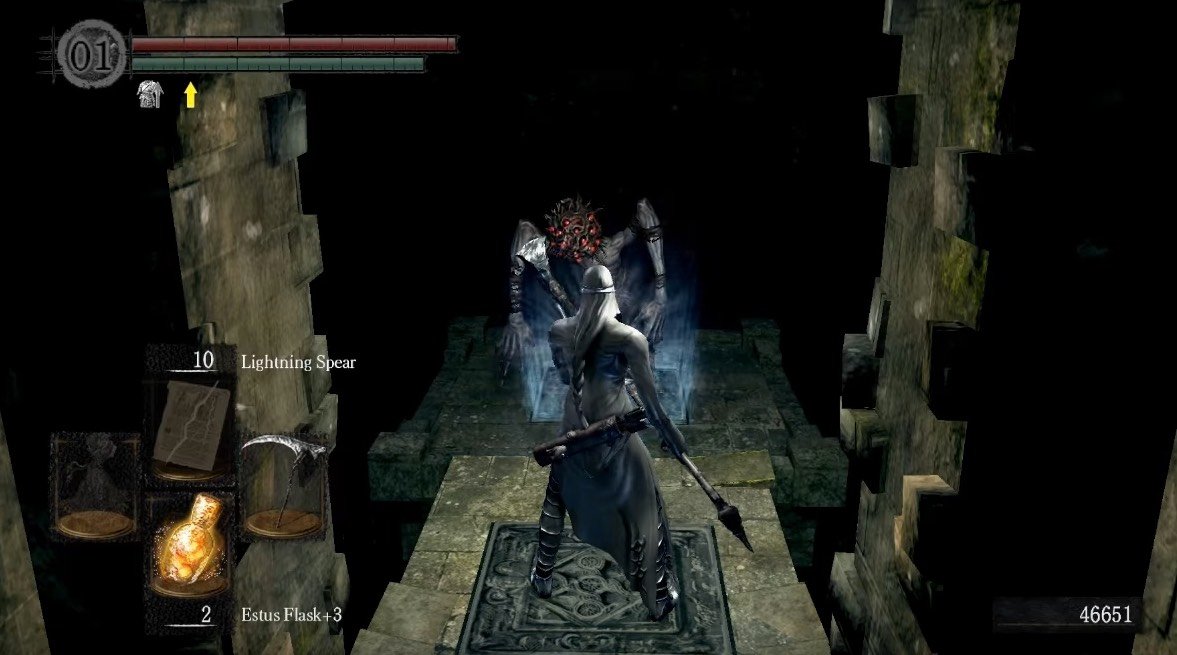