Weapon and armor upgrades in Dark Souls and Dark Souls Remastered are special enhancements that allow you to reinforce your equipment and apply elemental qualities or specializations to them. This section contains an overview of possible reinforcements and modifications as well as lists of farming locations for the Ore required to upgrade items

Regular Upgrade
Upgrade Regular weapons from +0 to +15.
Regular ascension path allows weapon to increase base damage with STR and DEX scaling. This is suitable for a long term use as it allows weapon to be repaired and thus the weapon will not break unlike crystal weapons.

Crystal Upgrade
Upgrade Crystal weapons from +0 to +5.
Crystal ascension path allows weapon to deal more physical damage than the regular weapons. Mainly, increasing STR and DEX scaling while reducing its durability. This is suitable for short-term use as the weapon breaks and cannot be repaired at +5.

Raw Upgrade
Upgrade Raw weapons from +0 to +5.
Raw ascension path allows weapon to deal more damage early in the game by increasing their base damage.

Lightning Upgrade
Upgrade Lightning weapons from +0 to +5.
Lightning ascension path allows weapon to deal Lightning Damage. This is popular in low level player vs player (PVP) as most armor and shields have low lightning defense.

Enchanted Upgrade
Upgrade Enchanted weapons from +0 to +5.
Enchanted ascension path allows weapon to deal Magic Damage and increase Intelligence stat at a higher rate than the magic upgrade path. However, it reduces Dex and STR severely.

Chaos Upgrade
Upgrade Chaos weapons from +0 to +5.
Chaos ascension path allows weapon to deal Fire Damage and scales with Humanity but has no physical stat scaling. This is recommended for low level players with low stats.

Unique Upgrade
Upgrade Unique weapons from +0 to +5.
Unique Upgrade does not increase parameter bonus per upgrade level. It has a maximum upgrade to +5 that increases Base Damage greater than that of the regular weapons in terms of the damage output.

Reinforcement and Ascension in Dark Souls

How do I upgrade Weapons?

There are two terms used when referring to weapon upgrades: Reinforcement and Ascension.

Reinforcement refers to incremental upgrades of a weapon state whether that is normal, raw, divine, fire, etc. These incremental upgrades can be performed at any blacksmith (or bonfires provided you have the Weapon Smithbox). Depending on what type and state of weapon you are reinforcing will determine how many souls are needed and what type and quantity of Ore is required.

Ascension is the process of changing the weapon state entirely whether that is to raw, divine, enchanted, lightning, etc. Only blacksmiths can ascend a weapon and they need to have the appropriate Ember. Weapon ascension cannot be done at bonfires. Blacksmiths also give the option to downgrade or descend a weapon back to an unmodified state. This is done in the [Modify Weapon] menu. Once ascended, reinforcement can be continued at any blacksmith (or bonfires provided you have the Weapon Smithbox).

How do I upgrade Armor?

All blacksmiths can upgrade Armor. Armor Upgrades can also be done at a Bonfire after buying an Armor Smithbox.

What is Occult and Divine?

Occult and Divine are two different magic augmented weapon upgrades that scale with faith. Their magic properties are just magic damage, and are identical to any other magic augmented weapon. Their damage outputs are also very similar, but each of the upgrade paths have an added bonus against a select few enemies: 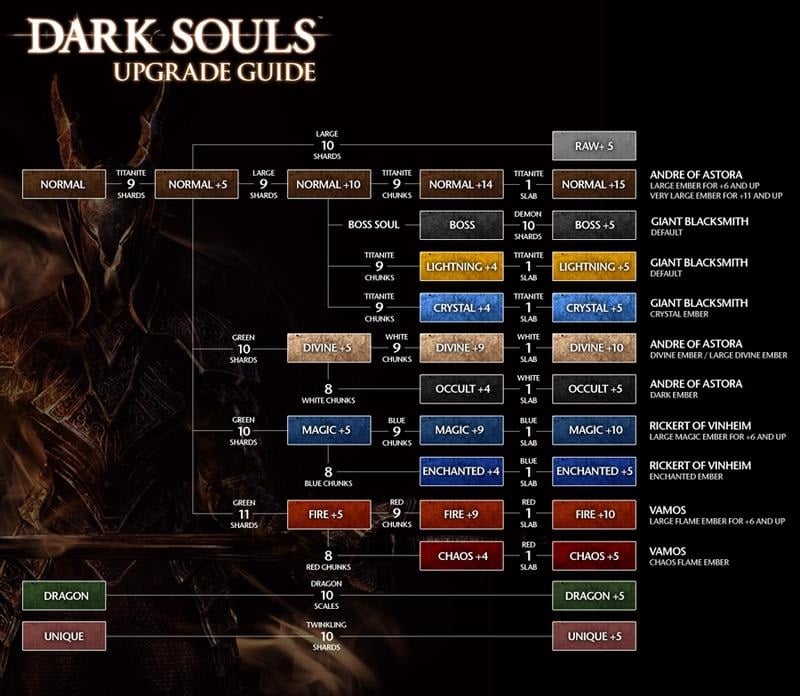 Ore are Items used in the upgrading of weapons and armor. Some ores can be fed to Kingseeker Frampt, and then broken down into smaller variants.
Please visit the Titanite Farming page for ideas on where to obtain Ore.

Embers are given to blacksmiths so they can grant weapon ascension used in modifying weapons. These items are listed as keys. Once you obtain an ember and hand it over to the qualified Blacksmith, he will be able to do that upgrade to any weapon as many times as you want (as long as you have the materials of course) The embers must be acquired again each playthrough!

The table below shows the calculation for the Base Damage and Parameter Scaling, Damage Reduction and Stability.

The table below shows the calculation for the Physical, Magical Defense and Resistance.