The Bed of Chaos is a Boss in Dark Souls.

The Bed of Chaos Information

In a futile attempt to prolong the Age of Fire, the Witch of Izalith tried to recreate the First Flame. The ritual was a failure and its power formed a bed of life which would become the source of all demons; trapping two of her daughters in the orbs on either side, and herself within it.

On your way to the boss' chamber below Lost Izalith, you will be attacked by a corrupted Daughter of Chaos. If you are keeping count of the Daughters of Chaos, excluding the spider sisters and the three we've just mentioned, that's only 5; the body Ceaseless Discharge guards and attacks you if you loot, is another sister, as well as Quelana - who you meet in the Blighttown swamp and asks you to help free her sisters.

She will often do a slow sweeping attack in which she drags a hand across the ground then raises her fist - a little slowly - and slams it down quickly afterwards, on the side the arm is located on. The animation for her lifting the arm up after the slam is a bit slow. While this attack can be blocked or dodged, if it makes contact with the player, will stagger them; the sweep will push while the slam will act like most overhead attacks in which will cause the player to fall momentarily.

There's a slight variation on this attack; instead of a swipe and slam, you'll be met with two quick swipe attacks. One arm from the side the player is on, followed by a quick sweep from the other arm. The starting animation looks the same so look for the end of the first swipe, to tell which attack is coming.

After destroying one glowing root, the fiery being will free one large scythe-like appendage from within the boss's back. This has a longer range than the boss's hands and will attack stab down at the ground, and drag its scythe and the player, towards it. Not only does this attack deal serious fire damage, it does a bit of physical as well. The fire-scythe is constantly poking around the ground, and can be evaded by rolling sideways.

The only variation in this attack is that destroying the second root will cause the Bed of Chaos to free its other appendage, which will also attack the player in a similar fashion. This just means there's more to dodge.

After destroying both glowing roots, the Bed of Chaos will start being able to cast a spell that is similar to Firestorm by lifting its fire scythe-like arms then thrusting them into the floor which reveals circles of fire on the ground, dictating where the pillars of fire will soon rise. Make use of these indicators, and dodge them appropriately. While very deadly, this attack is slightly rare, but its main danger resides in that it can be cast anywhere, including the small tunnel where the bug resides.

The Bed of Chaos may also shoot out fireballs from its torso. These are lumped upwards then fall while moving outwards, spraying the entire arena. While dangerous, they are slow moving and can be avoided by simply walking away from where they're landing. They do not home in, and hit the ground randomly. This attack is extremely rare and it is possible to go through countless battles with the Bed of Chaos without ever witnessing it.

If you loiter around the base of the tree, without proceeding into the tunnel, the Bed of Chaos lets out a scream before setting the area on fire. To avoid this, once you get to the base, run into the tunnel, and complete the mission.

This boss, akin to the Dragon God from Demon's Souls, is a puzzle boss. Upon entering the arena you will notice two large, non-respawning orange orbs, one on either side of the boss. These spheres contain one glowing root each, surrounded by normal roots; the glowing roots can be destroyed by normal damage while the regular roots can also be destroyed by rolling into them. 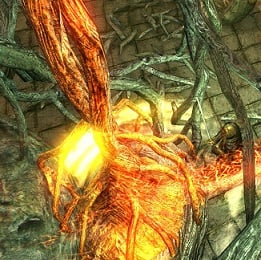 The two glowing roots need to be destroyed to proceed with the fight, but doing so causes a fiery being to emerge from the boss itself, increasing the boss' attack options and severity, and also causes the floor to begin to crumble in specific locations. The main danger of this fight is falling into these bottomless pits. Make sure not to sprint mindlessly as you will fall in the collapsing floor; stay attentive to the floor, more so than the boss.

Once you take both the orbs, carefully proceed down the middle, but expect a mass chunk of the floor to fall through. This will expose a little ledge you can jump off of and onto a thick tree branch. Before you do so, pay attention to the pattern of melee swings of the boss, so that they do not hit you midair and cause you to fail the jump. Run up the branch, rolling through the little branches sticking out of the cave entrance. In here, you'll find a small tunnel with more little branches you need to roll through.

Defeat the Bed of Chaos, by killing the Chaos Bug at the end of the small tunnel; any amount of damage will do the trick. 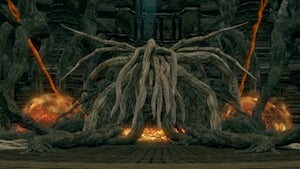 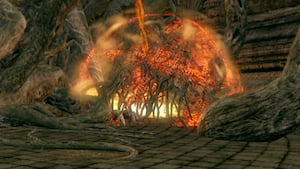 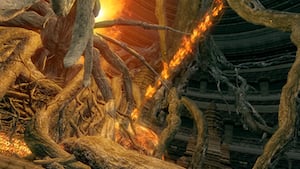 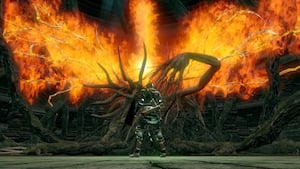 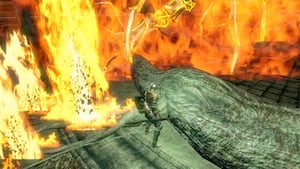 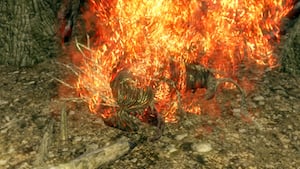