Dark Sun Gwyndolin is a Boss in Dark Souls.

"Mark the words of mineself, Gwyndolin! Thou shalt not go unpunished!"

The last born of Lord Gwyn, Gwyndolin is the leader of the Blade of the Dark Moon covenant and the only remaining deity in Anor Londo. Gwyndolin's followers are few, but their tasks are of vital importance. Although born male, due to magic and association with the moon, Gwyndolin was raised as a daughter. Gwyndolin is biologically a male and is referred to as male by Gwynevere, who lovingly calls him brother. Gwyndolin created the illusion of a sister Gwynevere to help guard over Anor Londo. An unmasking of these deities would be tantamount to blasphemy.

This optional boss is located by the Darkmoon Tomb bonfire, in Anor Londo, at the very bottom of the movable spiral staircase, behind a large statue of Lord Gwyn with a corpse lying to the left of the statue.

Note that angering Gwyndolin will be considered a sin. (NPC Hostility Sin)

There are two ways to open the Darkmoon Tomb, and thus gain access to Gwyndolin:

Entering the fog will break the Blade of the Dark Moon Covenant.

Contrary to what one would think, even if you defeat Gwyndolin, you won't break the Princess Guard Covenant nor will Anor Londo go dark, assuming you entered the way of the Darkmoon Blade Covenant Ring.

Regardless of build, you will want to have a high magic resist shield for this encounter. The Crest Shield is a good option.

The fight takes place in a seemingly endless hallway, with Gwyndolin at the far end. He will fire a variety of powerful magic and ranged attacks down the hallway as you approach, then teleport farther down the hallway and repeat this practice. Thus, unless one elects to use ranged weapons (as discussed below) the battle typically involves hiding from or evading various attacks while trying to move down the hallway as quickly as possible to land a few hits before Gwyndolin teleports, before doing it all over again until the he is finally dead.

Killing Gwyndolin will place a permanent sin upon you, and you can be constantly invaded by Blade of the Dark Moon  members (when human and online).

The fire keeper at the first bonfire in Anor Londo will become hostile after you have defeated Gwyndolin. She will drop a Fire Keeper Soul when killed, so it's worth it. Her bonfire will no longer work if she's killed, but you will still be able to warp there with the Lordvessel.

By turning Anor Londo dark, the fire keeper (if left alive) will move to the revolving stairs, leaving you unable to use her bonfire again.

The "endless" hallway where you fight Gwyndolin is actually not endless, just very long. Sprinting unhindered from start to end takes roughly 5 minutes. If you follow Gwyndolin to the far end of the hallway, he will stop warping and instead stand in one spot. Gwyndolin will still turn toward your position, but staying behind him will cause his attacks to miss.

The first summon to enter Gwyndolin's boss fog following the host will receive their own, different cutscene. It is also possible for the first cutscene to feature a summon instead of the host if the summon attempts to enter the fog at the same time as the host. This in turn can alter the statements and lecture Gwyndolin gives, depending on the covenant and status of the summon. The summon may then receive a second cutscene as well when they try to enter again.

Sometimes, if you rest at the Darkmoon Tomb (or the bonfire in the Cathedral) and die during the fight, it will warp you back at Anor Londo's bonfire. This bug happens often if you already killed the Anor Londo Firekeeper. If the bug occurs, and you killed the Firekeeper, you have to run all the way to another bonfire and teleport back to the Darkmoon Tomb. Tip: Never kill the Firekeeper of Anor Londo before you've killed Gwyndolin; Gwyndolin will still be there even after you kill them.

This large orb of blue magic is Gwyndolin's most powerful attack, as it is a quick and painful spell. It passes through all obstacles including the pillars on either side of the room, so you cannot hide from it. The best option is to roll straight through it using the Dark Wood Grain Ring, but it is also possible to roll to the side or block it with a high magic resist shield such as the Crest Shield  or the Crystal Magic Ring Shield. This attack can pass through Strong Magic Shield as well. You can tell when Gwyndolin is going to use this because it has the longest charge out of all his moves. If you are using more of a tanky character, just keep your shield up and eat the damage. Be prepared to use an Estus or Humanity, if you are ever struck.

For this attack, Gwyndolin will summon a barrage of smaller blue magic orbs, which home in on their target. For this attack it is best to get behind the pillars on either side, and wait for them to stop. Dodging doesn't work because, well they are homing, and cause a heavy amount of damage. The tell for this one will be when you see a blue light above Gwyndolin. No matter what type of character build you are using just get behind a pillar. With the Dark Wood Grain Ring, it is also possible to roll through most or all of the orbs, which can be a good gamble if you are close to Gwyndolin and think you can land a few hits. A high magic resist shield is also helpful here.

Gwyndolin will rise up higher and flick his arm to fire a stream of darts or large needles in a straight line. You can either take cover behind a pillar, or zigzag back and forth to avoid the stream of ranged attacks. You can also put up your shield to block some of the darts. This isn't recommended unless you have a pretty good shield.

It is possible to stagger Gwyndolin with a sufficiently powerful weapon and a properly timed attack, which can grant you additional time for additional attacks, and even disrupt his teleportation attempt. One effective approach is a 2 handed overhead sprint attack with a Greatsword, but other high poise affecting weapons are also viable.

Gwyndolin's soul can be used for upgrading at the Giant Blacksmith; you can upgrade to the Darkmoon Bow or Tin Darkmoon Catalyst.

While the Great Magic Barrier works well at defending against Gwyndolin's magic attacks, you're still better off dodging or blocking most attacks as you can still be staggered if hit. However, this miracle can provide you with the extra defense you need to become familiar with evading or absorbing a few attacks to reach Gwyndolin in time to do some damage.

This boss is fairly easy once you master dodging its moves. The only trick here is to zigzag back and forth to dodge his darts rather than hiding. The simple reason for this is to close the distance between the both of you, quicker. Once you get close, hit him with your most powerful weapon. Gwyndolin will not attack you at this range as he will instead teleport further down the hall - this prompts a short teleportation animation that allows you to attack for a little longer. Just stick to the strategies above and Gwyndolin will fall with ease.

Equip light armor and boosted stamina recovery, then two-hand your weapon. All the running you're doing can really drain your stamina, becoming ineffective when you reach the boss due to fatigue. This is why you will want to recover stamina quickly. You want to get to Gwyndolin as quick as you can by pacing yourself, keeping an eye on your stamina, and choosing when to exert it appropriately. You can get a good 3 hits in with the heaviest of weapons, draining a large portion of health (Gwyndolin's defenses are pitiful) if done properly. A lighter, lower stamina weapon such as a Falchion or Balder Side Sword  can also be very effective if upgraded, as you will be able to get more swings off with your remaining stamina at the end of each chase. Also consider a weapon with a good charge attack such as a Gargoyle Halberd, Great Scythe, or other polearms, as that may be the only attack you are able to land on the run before Gwyndolin teleports again.

For this one you want to hang back a little bit more. Rather than trying to zigzag out of the way of the darts you can just sit behind the pillars. It will be in between attacks when you will want to advance forward; keep a distance of 2 or 3 pillars from where Gwyndolin is standing to avoid triggering their teleportation. From here, you should be able to sneak out in between attacks and hit them with a ranged attack of your choice. Make sure to dodge the larger blue spell to avoid heartache.

Any Bow: After Gwyndolin teleports for the first time, stay where you are and shoot 6-7 poisoned arrows at him. To hit from this distance, you can arc arrows by aiming just above him. It may not show damage on hit but he'll get poisoned and will start losing HP very slowly (probably 3/sec). It takes approximately 100 arrows to take half of his HP on NG+. It is also possible to use fewer arrows to protect the poison. I recommend using wooden arrows to ensure you hit the target, then switch to poisoned ones when you zero in. It is also possible to do direct damage using range boosting gear, such as the Hawk Ring + the Black Bow of Pharis + Feather Arrows. The damage will be low, but can be combined with poison buildup to kill Gwyndolin in relative safety.

Dragonslayer Greatbow: When you first enter the fog Gwyndolin will teleport away after just a few steps toward him. After Gwyndolin teleports, take a couple steps backwards and you won't be attacked. If you use this bow, you can do about 100 damage per shot without aggro-ing the boss. It helps to have the Hawk Ring to increase your range.

Gywndolin is almost impossible to lock-on to as getting close enough to start actually attacking will trigger him to teleport away to safety, and cannot even be locked-on to during this animation.

The solution: get as close as you can and engage Gywndolin at point blank range.

Once you get within a certain distance of Gwyndolin (while he's shooting arrows), he will try to teleport. Since you can't lock on make sure you are at very close range before using spells like Soul Spear. It is possible to kill Gywndolin with 3-4 Soul Spears or another powerful spell as the boss is extremely weak once you can get close to him. Homing spells such as Homing Soulmass can also work well if you are able to get close enough for the spell to fire before Gwyndolin teleports.

Miracles/Pyromancy : Due to the difficulties in locking on to Gwyndolin, players can have better luck using fast cast AoE spells that are effective without targeting. Wrath of the Gods can be effective, as are pyromancies such as Combustion and Great Combustion. Fireball type pyromancies are not recommended unless the player has high Dexterity to increase cast speed, and ideally other summoned allies who can serve as alternate targets for Gwyndolin's spells and give the pyromancer time to get off the blast. Other area of effect miracles or pyromancies such as Gravelord Sword Dance or Fire Tempest-esque pyromancies are very difficult to time against Gwyndolin's teleporting, and are not recommended. 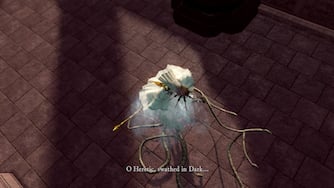 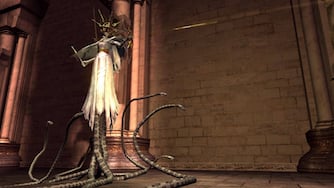 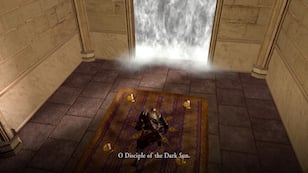 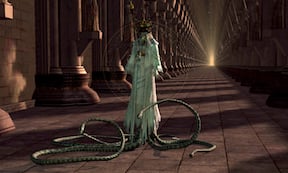 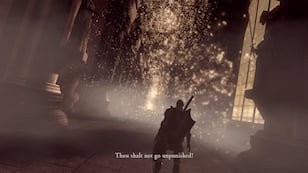