Ceaseless Discharge is a Boss in Dark Souls.

Not only an imposing fire-based boss found in the Demon Ruins, Ceaseless Discharge, as his name may suggest, is the source of the lava flow. Killing him will cease the discharge of lava in the lower parts of the ruins, allowing access to the deeper areas of the map, and progress in the campaign.

He was also confirmed to  in fact, be the younger brother of the Daughters of Chaos.

He's a passive enemy unless you attack him or loot the Gold-Hemmed Black Set, in which case, he becomes hostile.

Ceaseless Discharge will groan and slowly lift a limb up high above his head, before slamming it down with great frontal distance. Can be evaded by side-rolling at the appropriate time (around the peak of the limb's height, just before he slams it down.) Or, if your Endurance allows maximum movement speed, strafing will suffice.

There is a variation on this attack which comes in the form of an additional melee strike, in succession to the first. However the second strike follows your location, and will hit you if your roll was ill-timed.

Ceaseless Discharge will begin rapidly slamming his various claw-like limbs into the ground around you at random, somewhere between 6-10 times. The best thing to do in this situation is to not get caught in it. The second best thing to do is to leg it, and get behind cover.

Ceaseless Discharge swings a large limb from left to right, covering a massive arc. He will slowly wind his body/limb before doing this, and it must be rolled under. The best place to roll is as close to the beginning of the arc as possible, as the limb is highest off the ground here. Can knock you around a fair distance (especially with low Poise) and even off the ledge. You do not want to be hit by this.

If you are too far away from Ceaseless Discharge, he will slam a limb into the ground that propels a massive stream of fire in the direction of the slam. 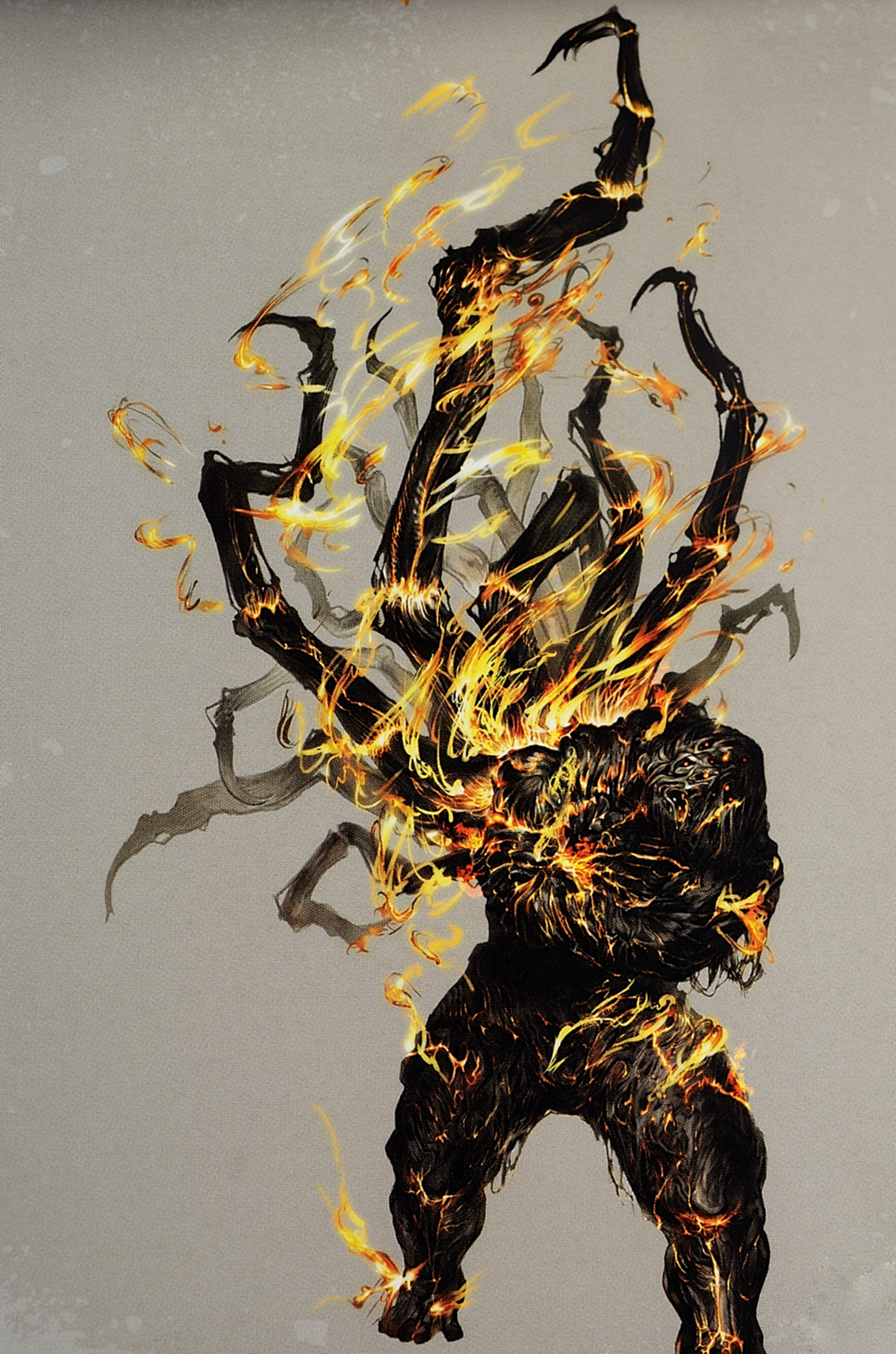 Note: His sideways slash attack will always go over your head if you run down the stairs.

Head to the large rock mass near where the Gold-Hemmed Black Set is to be acquired. If traveling from the armor location, make your first left and stop at the corner. You want Ceaseless Discharge to be around about the stairs. Have him spot you, and as he charges a single overhead melee attack, evade it by rolling to the right ONCE. As soon as the attack lands, quickly move back into position and attack. Ceaseless Discharge will almost always use a single overhead melee attack if you are spotted in this precise location - at the corner of the pathway, perhaps a few steps closer to him than the corner itself.

This is dangerously close to being in range of his Fire Breath attack, so you may need to experiment with the positioning until he only uses his single overhead melee attack, which is easily evaded with no damage taken. One you've got it on lock, rinse and repeat.

This one is especially easy in a first playthrough and has practically no risk. If you can (with buffs if necessary) survive the fire breath attack, simply stand at the minimum fire breath range, preferably with the boss at his initial position and tank it. There is plenty of time to get back up and get a few swings in before he raises his arm off the ground. If you have enough consumables/flasks/heal miracles, you can simply repeat the process, healing between attacks without even moving.

If you get stuck after death with him still in aggro, are unable to lure him to the ledge, and tanking him is not an option, then equip some strong fire gear/shield and the sweat spell. Cast the spell on yourself and run as fast as you can to the "safe spot" behind the giant boulder. Flash Sweat should gain you an extra attack or two to run. When you are safely behind the rock, heal. Keep your shield raised and slowly walk behind the rock until his aggro wears off. If you slowly walk to the left side of the rock you should be able to see his tentacles waving around. You can shoot his tentacles without aggravating him again, and at 125 a hit, he dies pretty easily.

Equip light armor before passing into the fog gate. Once you pick up the Gold-Hemmed Black Set on the far size of the zone, wait for him to do his lava punch spray attack, then run as fast as you can back to the fog gate. If you die en route, you must go all the way back to the altar where the loot was, and try again; if you attempt this post mortem, you will be attacked as soon as you traverse the fog gate.

Once at the fog (do not proceed through yet), the Ceaseless will stop, hesitate, and then take a leap over the chasm in an attempt to attack you - hug the fog to avoid any needless damage. At this point, it's only hanging on by one hand, which means a few attacks to it will plummet Ceaseless Discharge and his life bar.

This strategy only works once you have picked up the Gold-Hemmed Black Set. If you start the fight by shooting him with a bow, he wouldn't pull out his arm as usual, but instead, he attacks you from a distance with a stream of fire.