Chasm of the Abyss is a special DLC Location in Dark Souls, and included in the base game with Dark Souls Remastered. A Dark zone after the Oolacile Township, populated with Humanity spirits and the bloat-head Oolacile residents. This area has Prism stones marking the route to the boss.

Chasm of the Abyssn Map

Full Chasm of the Abyss Walkthrough

At the bonfire we left of at in the Oolacile Township, head into the darkness. You may want to get yourself a light source for this section, although it is not completely necessary. First, head left and downwards where you will come across a Crystal Lizard. Continue down this way and you should eventually descend a ramp, which on the right of, is another Resident. Proceed in the same direction you were heading, to find red eye heads and an item in the distance. There are 5 Oolacile Residents and 1 Oolacile Sorceress protecting a Dark Bead - an overpowered dark magic spell. 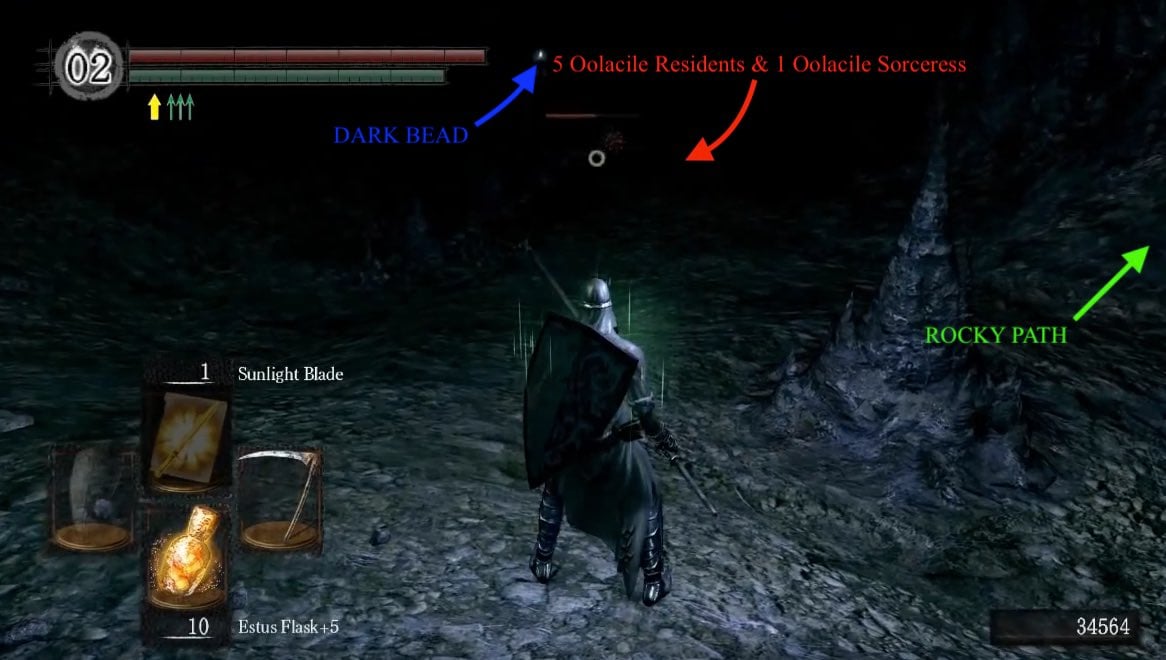 Head back and stay vigilant to make a left turn onto a rocky path, at which it overlooks a great area of familiar-looking black ghostly forms, once crossing it. These are Giant Humanities. When you get to the end of the rocky bridge path, you'll find a split; turn left (recommended/optional), or right into battle with the countless Giant Humanity entities; whatever you choose to do first, you will have to engage these spirits at some point, so here are a few tips and notes on them:

Choosing to head onto the platform on your left will result in the floor disappearing and you falling through to the level below - an illusionary floor! you've seen it all now - where you will find the Spirit of Alvina, who in fact, shielded your fall, explaining the lack of fall damage. Proceed towards her and she will disappear, revealing a path. Take it, following wherever her spirit places itself, and killing any Giant Humanities along the way. Doing so will  lead you to an open area, with Giant Humanities on your right, a door to your left and an illusionary wall behind where she disappeared. 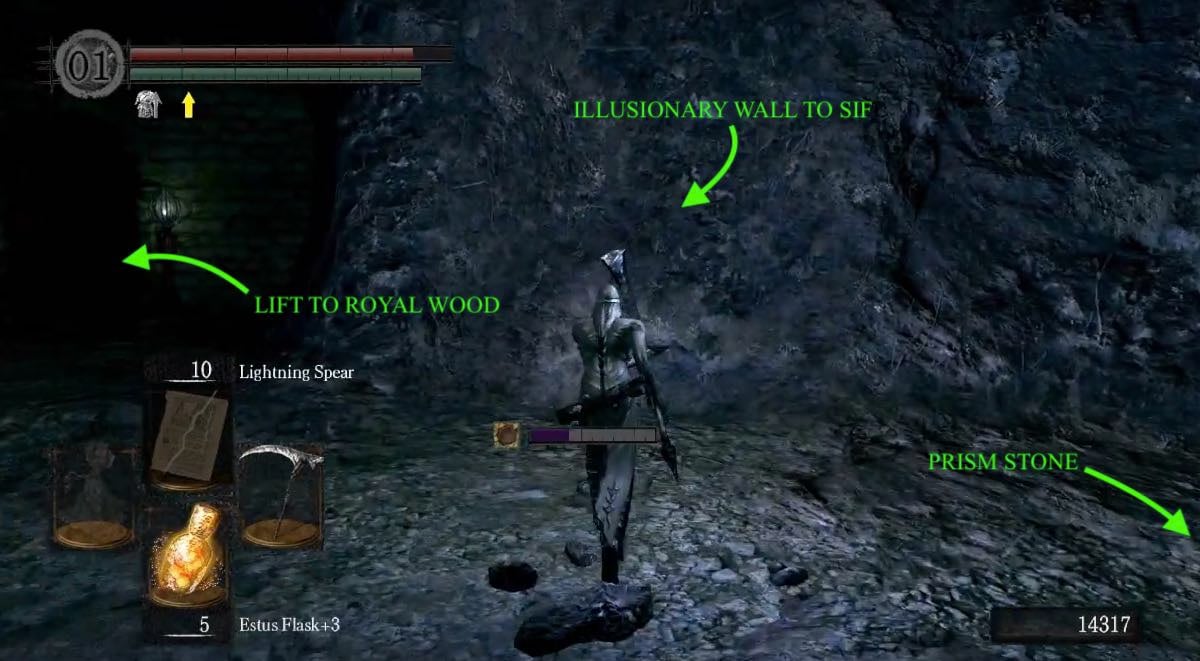 The left door is access to another useful lift shortcut that leads up to the final fog gate of Royal Wood (same location with access to Marvelous Chester and the Black Dragon Kalameet), and the illusionary wall leads into a cave where you will find the wolf cub Sif, surrounded by Giant Humanity Spirits ; save him by slaying them all, at which point he will howl and disappear, dropping a Cleansing Greatshield - the same shield that protected him from the spirits. Should you do this, you will be able to summon the wolf cub inside Manus's boss room(extremely useful distraction and decent damage). 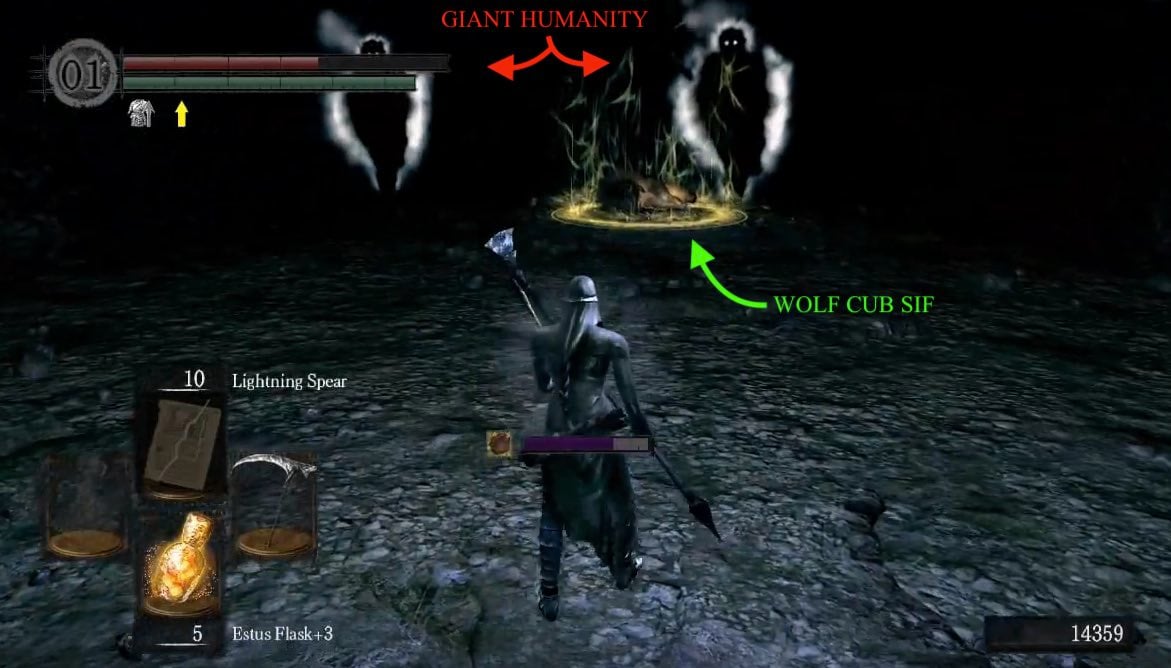 Once Sif is saved and you've opened the shortcut, head to the area with the many Giant Humanities and find the Prism Stone on a path. Follow the path then continue up to kill a Sorceress, and grab the Humanity from the corpse. Head back this ramp and turn right, where you will head down and face several Giant Humanities to reach the Black Flame at the end.

No Love for the Doggo

If you chose against saving the baby wolf, and went right instead, you will need a long range weapon or extensive use of the Silver Pendant, as there will be an Oolacile Sorceress attacking you from afar as you attempt to fight the spirits. Once the area is clear, don't follow the prism stones down to the boss and the slab, on the left just yet. Instead, go to the wall that you came down and fall off the ledge to the left for "Help Me!" Carving, then further fall down for a Black Flame(Pyromancy). This leads to the same area as the optional route, but without spirit Alvina guiding you along to save the puppy. 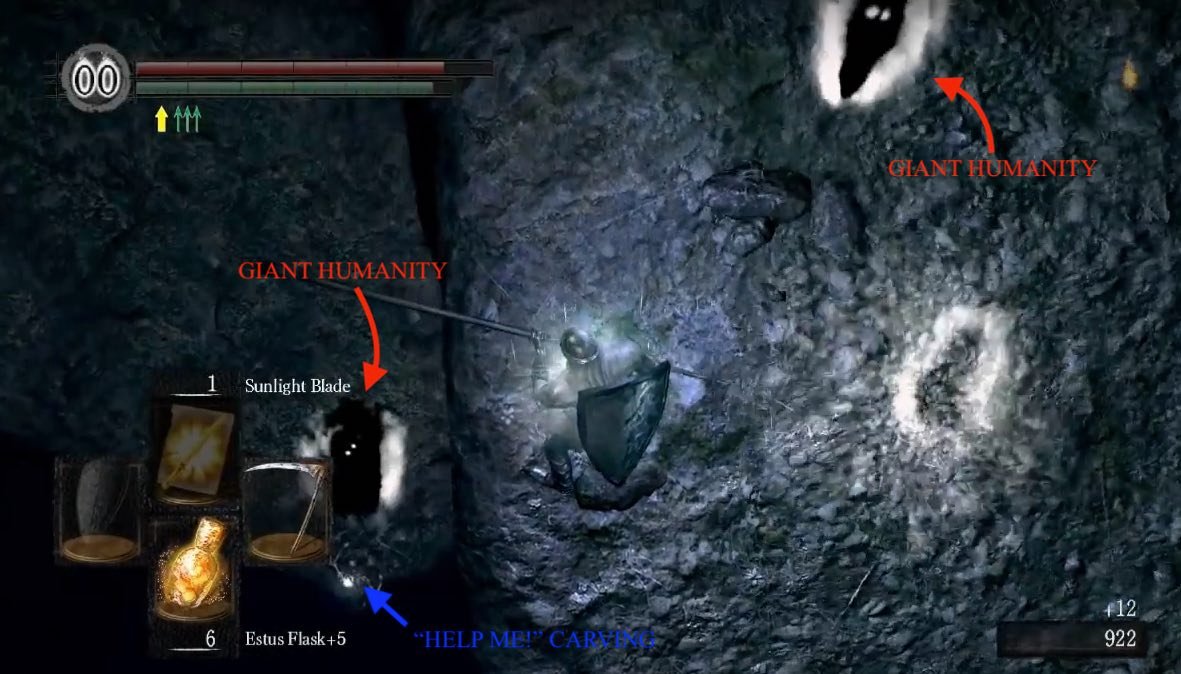 Head up to where the Sorceress was/is and jump down into the area infested/formerly infested with Giant Humanities. Follow the collapsed pillar with Prism Stones around it down then head under the pillar for a Twin Humanities. Head into the caves next to the pillar, and turn right at the intersection, fighting off two Giant Humanities along the way, to find the White Titanite Slab on a ledge. Turn around and drop down the ledge and fight the few spirits on your left to gain a Soul of a Hero. Now all that is left is to traverse the fog gate, and face a very formidable opponent. 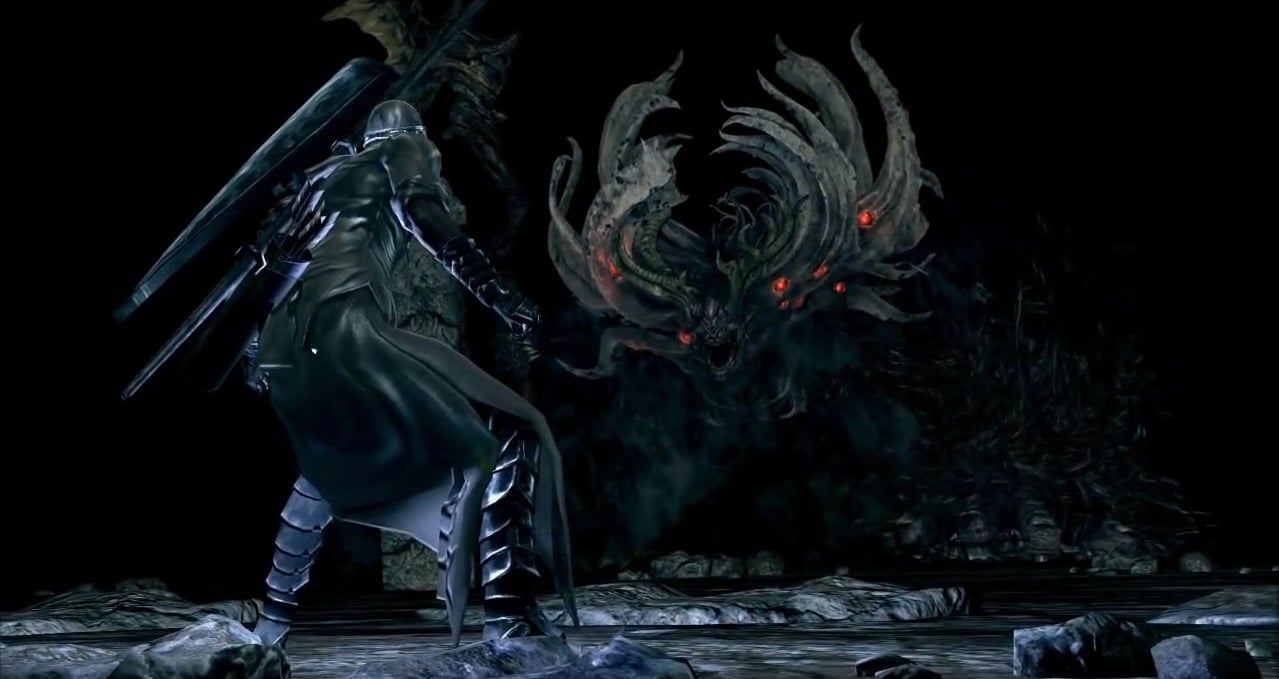 After you defeat Manus, you can head back up to the Royal Wood to take on Black Dragon Kalameet, after obtaining the Crest Key to access the room in which Hawkeye Gough resides.

Chasm of the abyss is one of the best places to farm humanity. Starting from the Chasm's bonfire, head forward and carefully follow the path keeping your right. Keep looking for a lonely resident (red eyes in the dark) because you will need to get on his platform. Once you killed him, you should see a ton of humanity phantom, and a second platform about half the distance between you and the ground full of ghost. Get on that platform, and be prepared to fight for your life. Once you get down there, I recommend a long range weapon with a circular move-set (like the Zweihander) also, if you have the stats for it, Grant's special (R2 while 2handing it) one shot any small and medium phantom in NG++ with 36 faith. After you made yourself some space on the phantom ground, locate the "Help Me!" Carving corpse and jump there, then fall again where the Black Flame (pyromancy) was. From there, follow the prism stone route all the way back to the mage and kill him. Once he is dead, you can fall down on the previous ''ghost ground level'' and finish the rest of them off. Use a Homeward bone and start again. Enjoy!