Lower New Londo Ruins is a location in Dark Souls and Dark Souls Remastered. Access Lower New Londo is granted by turning the lever in the Spiral Staircase Tower in Upper New Londo to open the seal and drain the flood waters into the Valley of Drakes. With the water lowered, there are a number of ways to access the area:

Below the Tide Line - At the Seal Door

The Darkwraith Knight Rises - The elevator in the Spiral Staircase tower brings you down to Lower New Londo Ruins and if you notice to your right, the large seal doors that lead to the Valley of Drakes, are now open. Shortly after exiting the doorway of the elevator, a new enemy will emerge for the first time, since the flooding - Darkwraith Knight. This is the standard enemy of the Lower New Londo Ruins, meaning you're set to encounter several of them as you explore. That being said, here's a few things to know about the Darkwraith Knights: 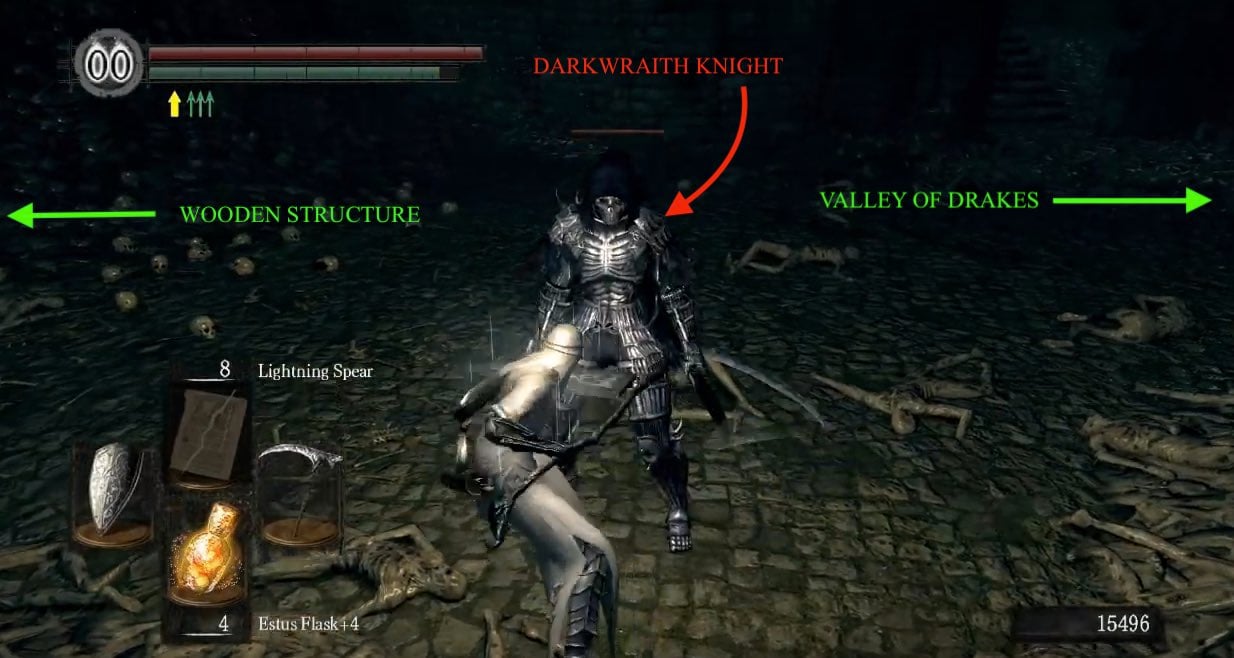 Traverse The Fog pt 1 - After your first Darkwraith Knight, on your right are the seal doors to the Valley of Drakes; but we are going left. Head into the ruined doorway and up the stairs into a wooden structure. In this structure, head right to find a door that will lead you to a Large Soul of a Proud Knight and another Darkwraith Knight, in the room on the left. Head into that room to find a fog gate.

Slimy Mess - After traversing the fog gate the first being immediately on your right as you walk inside.  Take a few steps forward (before you're standing level with the wooden wall on the right) and move back to towards the fog gate. This will lure the first Darkwraith Knight, into a well-enough lit area. After defeating the first, you can lure the second that is in the dark, to the left. This one has his back towards you so take the opportunity to backstab him, if possible. On the right sits a large slime-like monster; this new enemy is called the Mass of Souls (NOTE: They have the ability to spawn Wisps; floating disembodied heads that explode in proximity to you - a telltale sign is when they start to shake and glow red.one). The old reliable combination of attacking and rolling, is most appropriate when facing this blob -  it's spear tongue attack has a very decent range behind it so dodge to the side rather than backwards. After defeating the Mass of Souls, continue down the hall until you find another Darkwraith Knight on the right, behind the wooden stall. At the end of this room you will find two doorways: 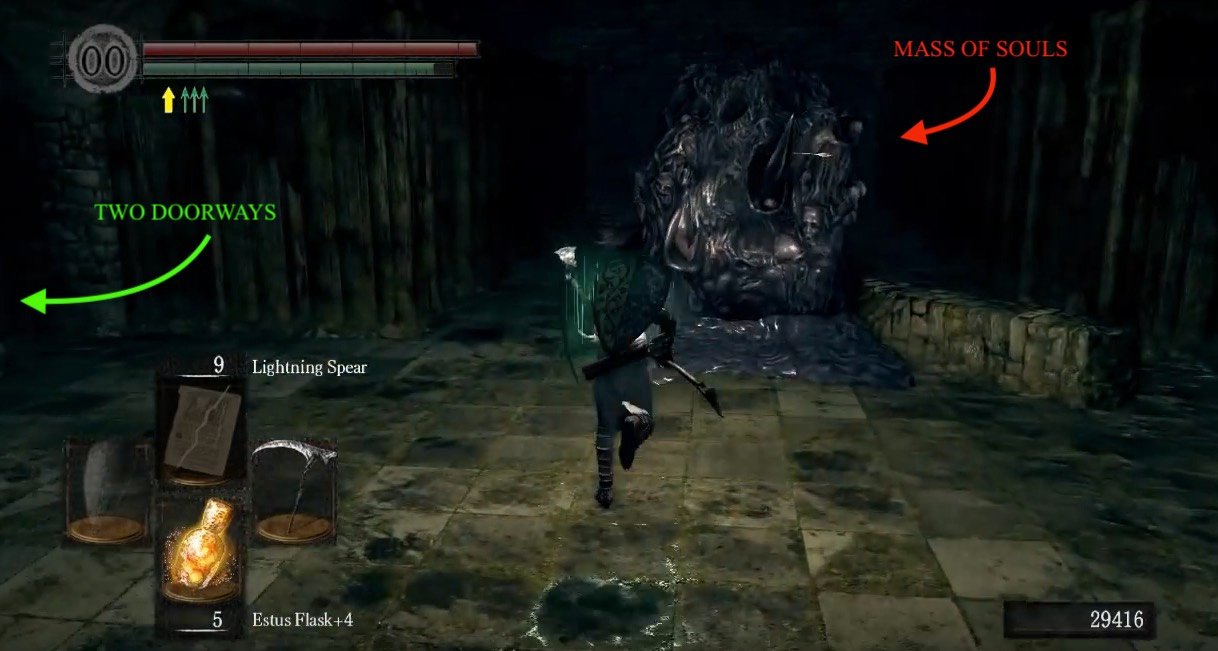 Left - Leads to an elevator and a lever to activate it, to take you to the Upper New Londo Ruins.

Right - Past the short corridor you'll find a stairwell leading up. At the top, go straight to pick up a Soul of a Brave Warrior then head back and follow the only other pathway; continue along this pathway, up the staircase, which you then turn left to find a chest holding a Very Large Ember. Head back down the staircase, and at the bottom, turn left and continue until you've reached the edge of the platform. Jump down.

Below the Tide Line - Between the Towers

Getting There - From where you land, head left and descend into the shallow pool of water. Go straight until you find a little ramp you can climb to reach the dry land and battle another Darkwraith Knight. Head towards the direction the Darkwraith Knight emerged from to find a Large Soul of a Proud Knight.

From there, move just a few steps forward and to your right, you should see a blocked archway; you can hit it to reveal a secret passage across a thin walkway. At this point, you should shoot an arrow (at about head level) into the darkness on the other side of the walkway to reveal and lure another Darkwraith Knight. Cross the walkway to find a chest containing a Titanite Chunk. Heading in a north-east direction when exiting the arch, you'll notice some stairs with item on it, we'll head up here in a second. 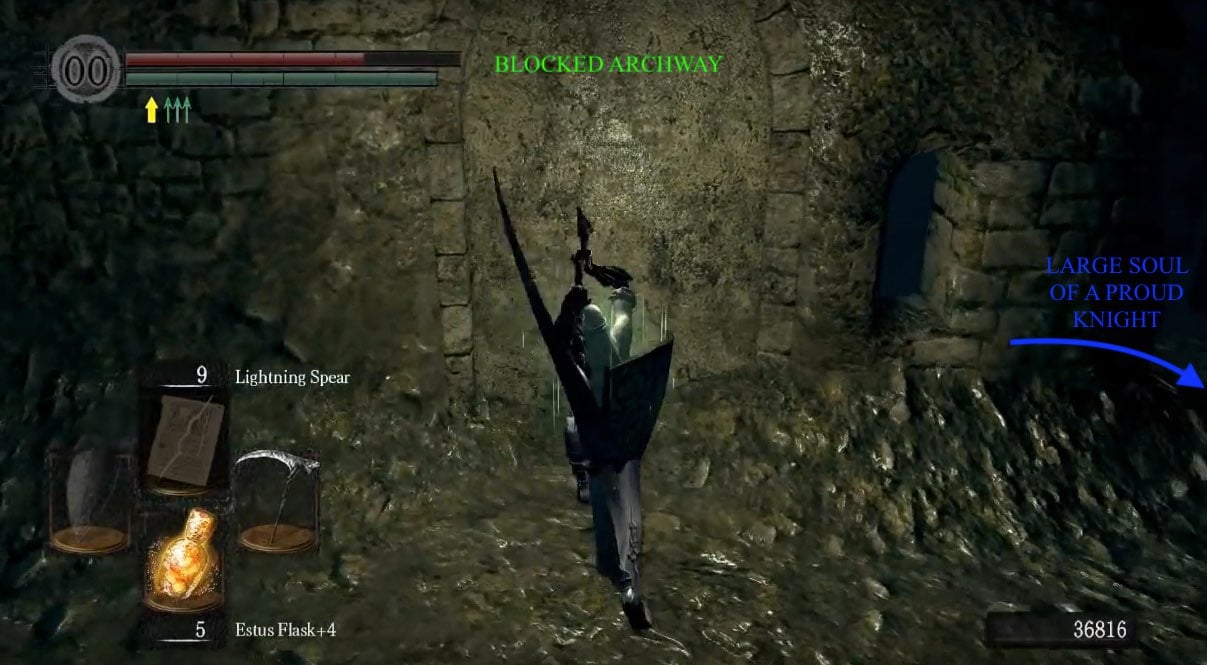 Note: This outdoor area between the first and second tower is where you'll drop into when you come from Firelink Shrine, outlined above in option 3 in the ways to access the Lower New Londo Ruins. So, should you die after lowering the water, which is almost a certainty, then ensure you know how to access this shortcut in order to limit your frustration, as it is the quickest way to get back to where you were.

Look to the left of the stairs to find a corpse draped over a well holding six Cracked Red Eye Orbs, move around the right of the well to find another little area down some stairs with another Darkwraith Knight. Explore the area to the end if you wish, with all that it holds being only a short drop to take you back to the seal doors to the Valley of Drakes. Head back to the stairs we left momentarily, picking up a Large Soul of a Proud Knight while ascending them.

Second Square Tower (Lower Floor) & the Path to the Abyss

Who You Gonna Call? - Before entering the building, lure the two Ghosts that will come through the left wall by standing around the entrance then backing away (Note: You may not always be able to lure them successfully, if that's the case then just be aware of the two ghosts that can attack you from the left wall). Once they're gone, proceed inside to lure the two Darkwraith Knights first, then deal with the Mass of Souls (Tip: If you get it's attention and get it to follow you out the door you came in then it will get stuck in the door, making for an easy ranged kill; keep an eye on its Wisps too!). A third Ghost will attack from the left wall once you enter the room deep enough. In the right corner of the room, you'll find a chest containing a Titanite Chunk. 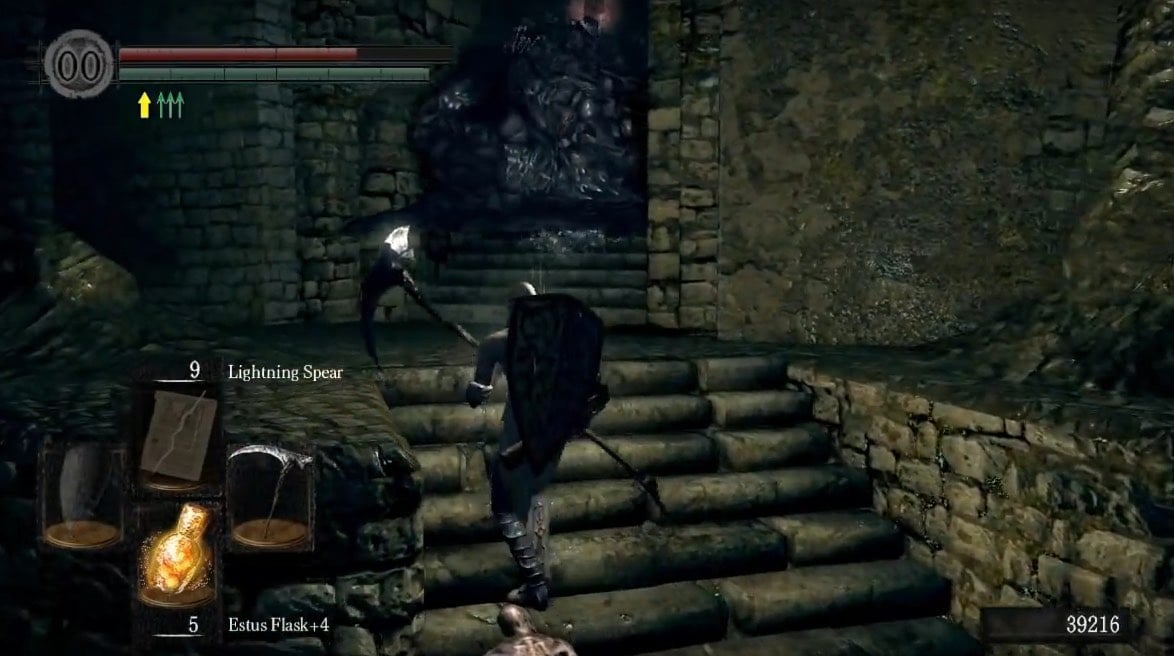 Turn 180 degrees from the chest to find a door leading outside. This will lead you to the fog gate, over a walkway. As you may have guessed, we're taking a right - because who would want to focus purely on objective, when you can take a million detours? - to find yet another Darkwraith Knight lurking in the darkness, around the corner. If you look around the area on the right to find the summon sign for Witch Beatrice; Beatrice's summon sign will only appear if you already enlisted her help for the Moonlight Butterfly boss in Darkroot Garden.

Ring Bound By Light - Before you head through the fog gate, ensure you have equipped the Covenant of Artorias Ring. If you don't have it then prepare for a deathly black demise, on the other side of this fog gate in the form of The Abyss. You won't be able to exit once you go through, so ensure you have obtained this ring by defeating The Great Grey Wolf Sif in Darkroot Garden before entering. With the ring on your finger, traverse the fog gate... 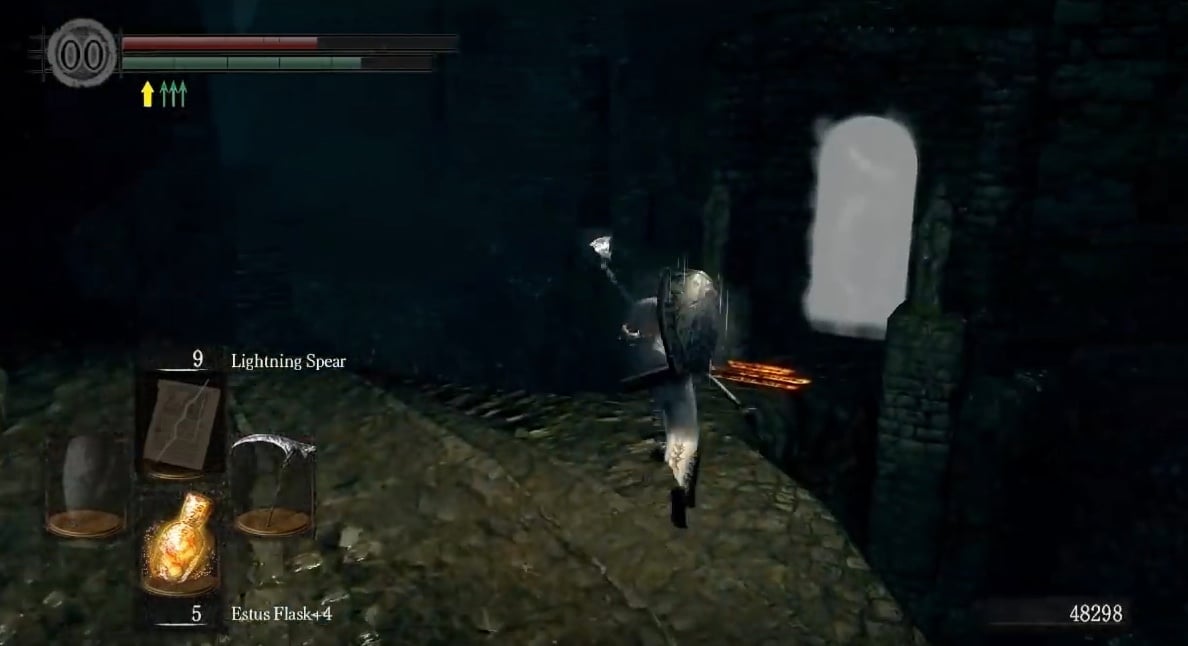