Royal Wood is a special DLC Location in Dark Souls, and included in the base game with Dark Souls Remastered. A large relatively open-ended area that looks suspiciously familiar to, but much more dangerous than the Darkroot Garden, featuring similar giant stone knights, and tree-tending ents of less dilapidated shades. Links the Oolacile Sanctuary to the Oolacile Township.

After leaving the Oolacile Sanctuary, you will cross a bridge then head up to the right to meet the first of two forms of the Treant Gardener: the Fork Scarecrows. They mainly use between a dash-and-ram move or lunge with their forks. This makes them very easy to block, and avoid. It's suggested you clear the front of the cliffs by slowly approaching the other nearby Gardener, which will draw the attention of another one sprinting at you. Now you can choose two options:

After Kalameet flies off, you may notice a Stone Guardian on the cliff above walking, if this is the case then know he is about to come crashing down onto your level to engage you. So you may want to stop and check before continuing. Venture right and continue until you find a Crystal Lizard looking to escape, which unfortunately due to its valuable loot, you can't let happen. Drop down the small cliff, onto a lower ledge and head left to find the second variation of the Treant Gardener; he is a bit faster, wields shears instead of a pitchfork, and has a 6-hit combo attack that isn't staggered by shields.

Before continuing into the forest ahead, turn around to the wall of the cliff you jumped off of, to find a gap separating a rock. Jump across it and head up a slope to find the Guardian Helmet.

Head back down to see 2 Stone Guardians marching in front of a cliff. From here you can see another corpse with Gough's Arrows on it. Head along the cliff to find the Guardian Armor on a corpse hanging from the cliff near some bushes. Get back to the gap and now hug the left side, dealing with another Treant Gardener along the way to find a secret area the only findable Elizabeth's Mushroom. Now proceed further towards the ridged area and in the tunnel to find another corpse with a Soul of a Proud Knight. Fall back down and proceed down one of two paths: 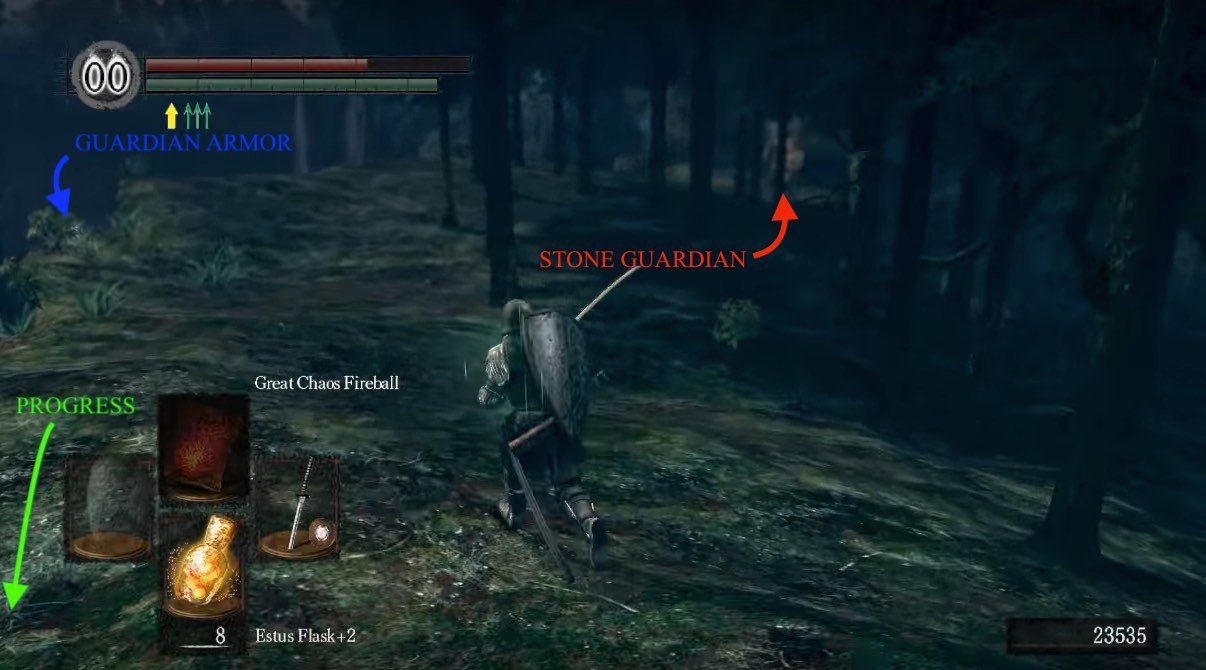 Journey to the Fog Gate

Continue forward until you've left the trees behind you and only have a Stone Giant, and a few Treant Gardeners to deal with. It easiest to just dash past them into the tower on the right, and onto the plate, activating a lift; however you can brave them, then continue in the same building. 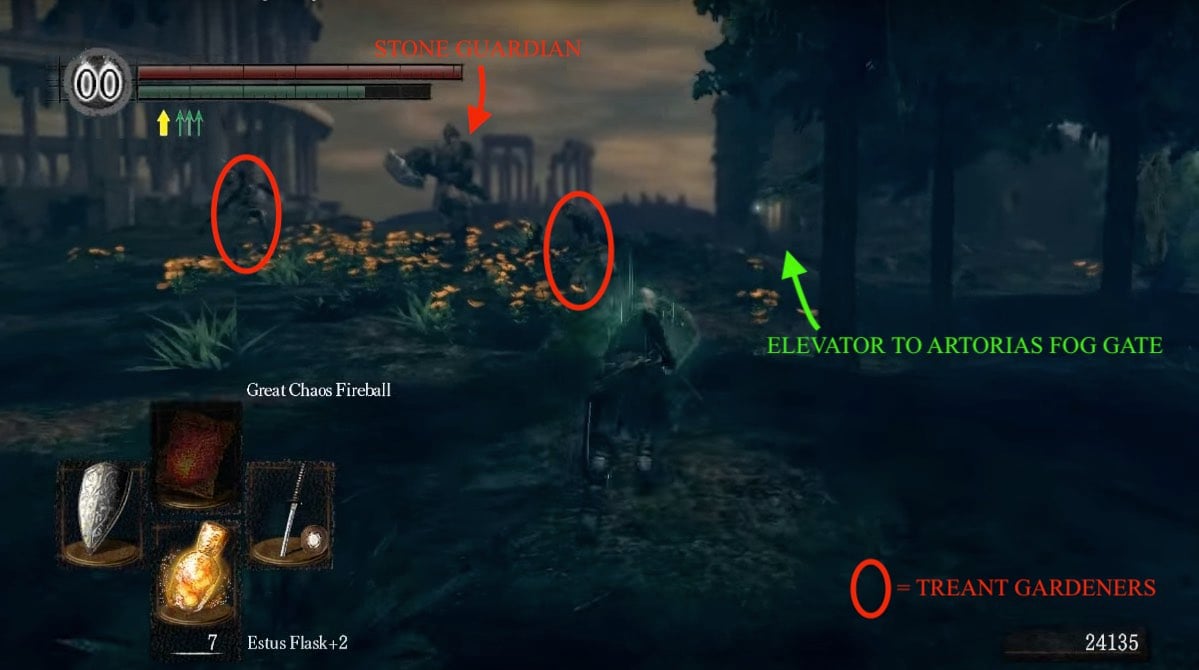 That one will take you down to the Colosseum fog gate. If you locate and cross the bridge to the right, you can find Marvelous Chester as well, a merchant of overpriced but useful goodies. If you continue right, into the tower at the end of the path, you can find access to another lift shortcut to the tower you collected the Guardian Gauntlets earlier. There is also a shortcut to the Chasms nearby, but you can't access it - yet. Head through the fog gate into the Colosseum to fight the boss. 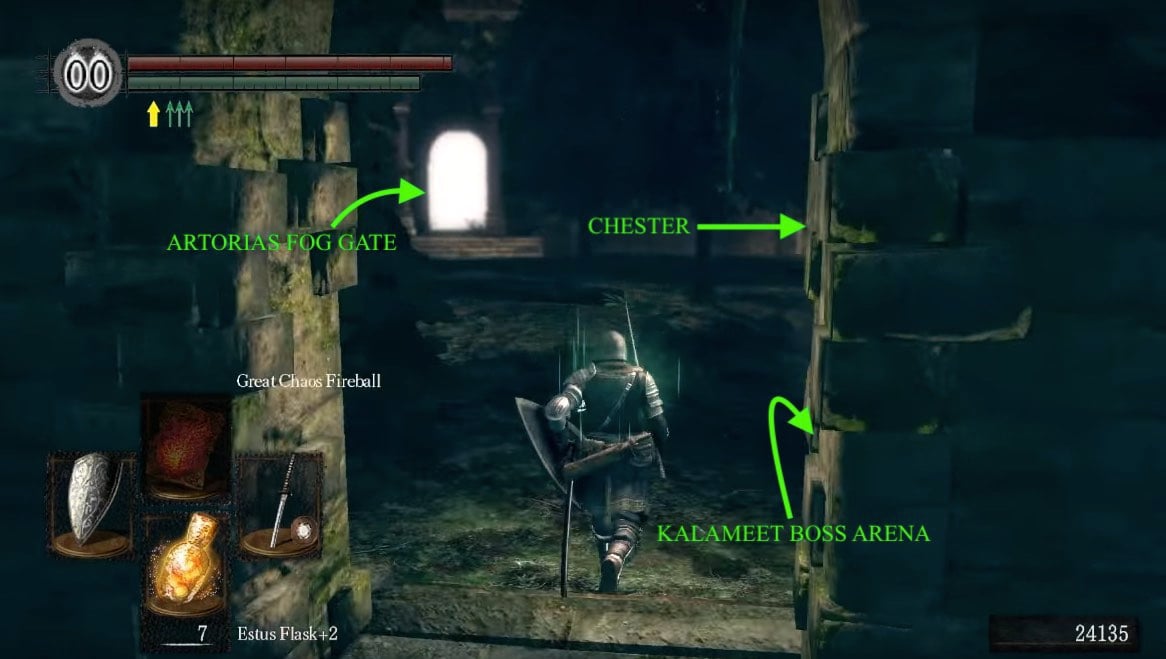 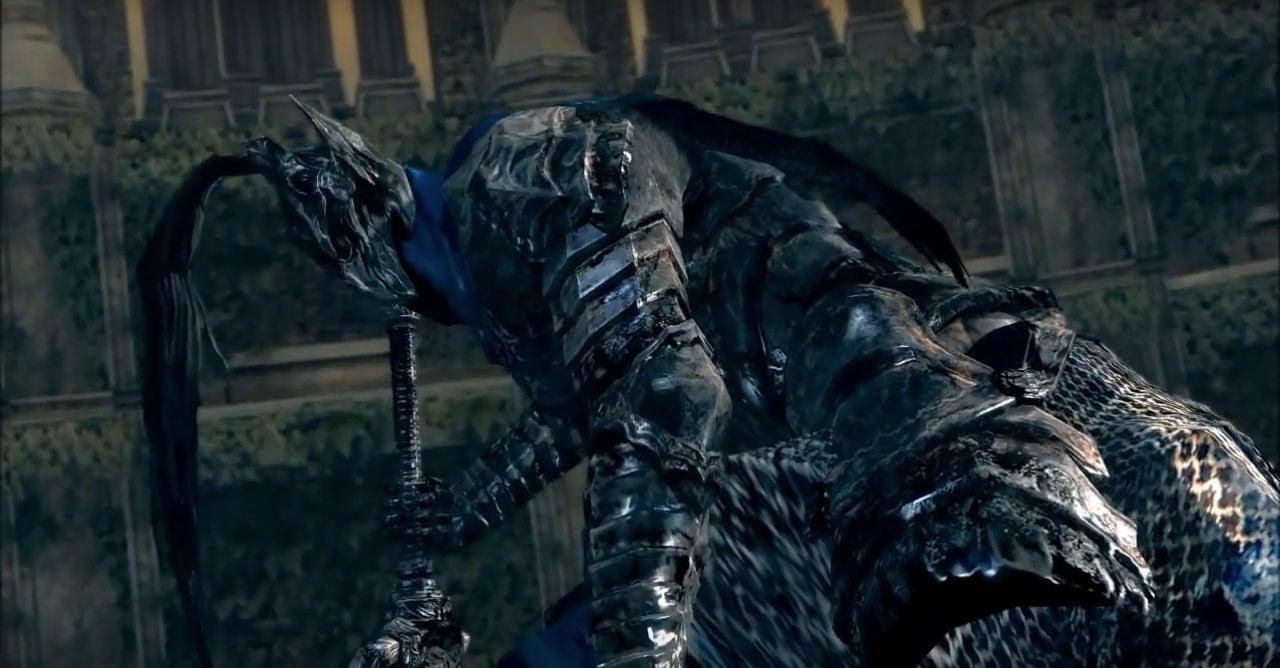 Note: The enemies in this section, with the exception of the first two Treant Gardeners, can be avoided by hugging the right edge of the map and dashing to the shortcut tower; this is useful for getting to Artorias the Abysswalker after finding all the goodies in the woods.

After beating Artorias the Abysswalker, walk through the other exit towards Oolacile Township.

If you exit the tower you just came from, and turn right 180 degrees, you'll find a Soul of a Brave Warrior , and a ramp heading downwards into what's informally referred to as Kalameet's Valley. On arriving at the bottom, make another 180 and follow the stream to kill two Wild Dogs and pick up the Large Soul of a Brave Warrior on the corpse at the back of the valley. Head back the way you came and continue onwards to kill three more Dogs, along the way. Then when you get to edge of the water fall, look over to find a small platform with a Crystal Lizard. Once you land here, you can use the subsequent protruding rocks below to get to the bottom without sustaining any fall damage. Alternatively, you there's a long ladder leading down into the valley proper, on the left. There are a few soul items near the center of the valley which can be safely accessed, but exploring too far will cause Black Dragon Kalameet to swoop down and hit you with an invariably lethal breath attack, so don't do this unless you're ready to enlist Gough's help with killing him, which first requires killing Artorias the Abysswalker, and finding a key later in the area. Note that Kalameet is an optional boss.