Knight Artorias is a Boss in Dark Souls Remastered. He is located just before Oolacile Township in the DLC portion of the game.

Knight Artorias was one of the four Knights of Gwyn, the commanding knights of Lord Gwyn's army. Artorias had an unbendable will of steel, which both helped and fed his hatred for servants of the Dark, particularly the Darkwraiths of Kaathe.

Lord Gwyn bequeathed him with a custom-made ring, the Wolf Ring, to assist in his already unmatched ability to wield a greatsword.

When in New Londo Artorias discovered the ability of abysswalking; earning him his title: Artorias the Abysswalker. This allowed him to enter The Abyss, the home of the Darkwraiths and the Four Kings themselves. At some unspecified time in the past, when Oolacile was attacked by the Abyss, Artorias traveled to Oolacile to rescue Princess Dusk of Oolacile.

Defeated by Manus and the Abyss, Artorias sacrificed his great shield to protect his loyal companion, a young Sif, from the myriad Humanity Sprites that littered the deepest reaches of Oolacile. With his left arm shattered following his confrontation with Manus, he had no use for the shield and chose to wield his greatsword in his one good hand. With time, Artorias became fully-corrupted by the Abyss (though, in hunting the corrupted denizens of Oolacile, it is clear he didn't wholly forget his mission). At some point after this, an unknown hero (The Chosen Undead) travelled back to the past and, in the process of relieving Oolacile of its corruption and rescuing Dusk, finally bested Artorias.

In doing so, The Chosen Undead preserved the lost knight's honour. Despite The Chosen Undead's feats, the saviour of Dusk and Oolacile would come to be attributed to Artorias. Rather than being corrupted by the Abyss like the rest of Oolacile, it was believed that he perished while facing the Abyss. Perhaps the only compatriot of Artorias that knew the truth was Sif, who in thanks for his rescue from the Abyss gifted The Chosen Undead Artorias' Cleansing Greatshield.

Melee Rolling Strategy
While this boss is really difficult to predict, he does have a few tells for his attacks and a quick roll is very important. Place yourself away from him by about twice his reach at all times (even for melee).

When he uses his Somersault slam attack you will want to roll to the right as the camera tilts upward while locked onto him. You want to do this three times and then get in 1 or 2 attacks (based on your weapon) after the third attack lands. Avoid attacking after his Steadfast Leap. Instead use that opportunity to heal or get some distance from him.

When he uses his Overhand Smash, roll to the right. While he leaves himself open for a frames, he will usually follow up with his Spinning Slash attack. Therefore it is best to get some distance from him instead as the Spinning Slash attack is difficult to get away from when it begins.

With his Charging Slash move you will always want to roll backwards from where he intends to land the attack. After successfully dodging this attack, you will be able to get 1 or 2 hits on him.
His Heavy Thrust attack will need to be side dodged. Depending on which way he turns during the charge, you will need to dodge the opposite way. After you dodge he has a long recovery time and you should be able to get 2 or 3 hits in.

When you are behind Artorias he may use his Abyss Sludge attack. This move does little damage but can stun you. If timed right, you can roll forward through the attack and get a hit on him then immediately retreat.
After Artorias has lost 1/3 of his health he will start to use his Wrath of the Abyss power up. If left alone, he will do much more damage after he completes the power up for a limited time, potentially one shotting you. If you can get close fast enough, you can stun him out of his power up before it's completed by hitting him repeatedly. If you don't do enough damage fast enough then he will hit you with an AOE blast attack that will knock you on your back. Your best bet is to use a heavy, high damage, weapon and stop him from gaining his attack buff, or to quickly whip out a bow and shoot him in the face.

Heavy Melee
He has 3750 HP and gives 50000 souls.
Artorias lives up to his billing as being unmatched with a greatsword, and even co-op battles against him can be a drawn out and exhausting affair. He is extremely aggressive (pretty much like Gwyn) and usually controls the pace of the fight, but also uses his speed and dodge-rolls to defend himself or break away from walls or multiple attackers. He switches rapidly between defense/offense as well as his targets, and will press his attacks against injured opponents to finish them off before they can heal. It is very important to keep moving and not let him wind up on you. Summoned players should try to maintain aggro on him and keep him away from the host, as his aggressive tactics and leaping abilities can make it easy for him to cover a lot of ground and surprise a host particularly if they are trying to cast a spell or drink Estus. Staying at a close or middle distance while constantly strafing to one side can be an effective way to avoid his various gliding stabs and somersaults, but backing off too far can result in punishing leap attacks that track fairly well, or give him time to use his charge up attack. All of his attacks can be blocked with a fairly nice shield quite easily (Balder Shield + 5 for example is more than enough) so you should try to use a good shield and keep your guard up whenever possible. Blocking with a high stability shield and good stamina tends to be safer than trying to roll through his attacks, as a number of his attacks have the range and tracking to punish all but the most perfectly timed and directed roll evasions. But when he pauses to kneel down and start charging his power up, that is the moment you NEED to attack him. He can be staggered out of his charging animation with a few swings of a strong melee weapon (such as a greatsword or ultra greatsword wielded two handed) or by the obsidian greatsword's 2-handed R2 AoE attack. This can also be an opportunity to hit him with a few spells. If you let him fully charge however he will emit an AoE attack and increase his damage for some time. After a few times he may be far to strong to be blocked in any way, depending on the shield used.
NG+: The charge-up which increases his damage will not last for the entire fight, but he might charge again before it has run out. Even charged though, he remains blockable, only his very high leap can be unblockable and must be avoided by walking backwards from him, otherwise he will strike behind your shield. If only attacked in uncharged state and healed when he´s at a distance makes this fight very controllable.
Always keep stamina bar over 50% at all time as none of his direct attacks are to be taken lightly and considering Artorias' extremely fast stance recovery/follow-up speed.
Note: I've experienced the fight easier with a long ranged spear, like the Silver Knight Spear. With a long ranged spear, you can safely hit him once or twice when he has landed his Savage Leaping Strike, Somersault Smashing Combo and his Gliding Slash (always remember that while rolling to his left side, you cant be hit with this attack), just remember to quickly roll backwards after you've hit him. Also, some poise will help you with the fight, as with around 40 poise you can outstand one or two of his weaker attacks, and one hit of his Somersault Smashing Combo, and safely roll out if you miss the timing.

This fight becomes relatively easy for an upgraded pyromancer. You will need to have your flame upgraded to ascended max and have acquired the Power Within, Great Chaos Fireball (GCF) and Great Fireball (GF) spells. Also, having a 100% high stability shield (I used Caduceus Kite Shield) the Crown of Dusk (or other pyro boosting gear), Cloranthy Ring and Dark Wood Grain Ring will help a lot. The Cloranthy to keep your stamina up and Dark Wood Ring to give you extra dodge frames. At the fog door pop Power Within. Enter and try and bait him into doing his high leap attack. Dodge the attack with a quick side roll and immediately hit him with a GCF. Rinse repeat. After the second (or sometimes first) GCF he will back flip to do his buff charge up. Be on the look out for this constantly! As soon as he does this rush to casting range and hit him with two quick GCF. This will stagger him out of the buff. At this point you may have one GCF left. It is best to switch to GF if you do, you always want to have 2 spells queued up to interrupt the buff. Follow the same strategy with GF. It shouldn't take more than all of your GCF and GF to finish him, but you may want to have some fireballs on hand in case you miss a GCF or GF or two. 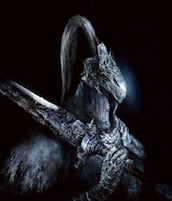 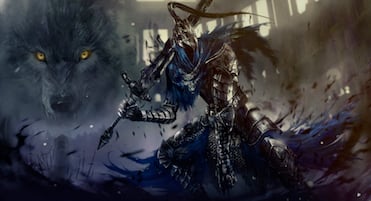 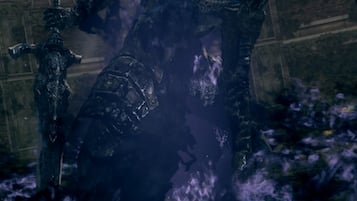 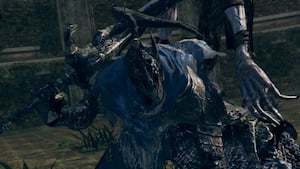 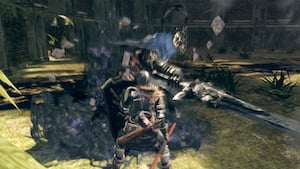 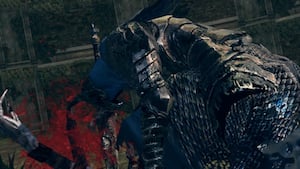