Darkroot Basin is a Location in Dark Souls and Dark Souls Remastered. A sub-level of Darkroot Garden, it is not essential to explore it for the main quest. It's accessed by going down a steep path near the entrance of the Garden, just past the first Ent. There is no official boss in the area, but there are still a couple of tough enemies to defeat in the Hydra and Golden Crystal Golem.

Down the Garden Path

Darkroot Garden Detour - You can access Darkroot Basin by taking a right turn after defeating the first Ent in Darkroot Garden, once you leave the blacksmith. After you take that right turn, you will be at the top of a cliff and have to steer through a fairly narrow pathway. On the way down, you will find a Crystal Lizard; be quick or watch it disappear and miss out on the its valuable drops. On your way down, there is a small platform that you can drop on to, that just so happens to hold the Hunter Set.

Once you make it down further you have two paths:

Hard Men - There are four Crystal Golems in here. Try luring them out one at a time with arrows to avoid going too far into the woods. If you go too far in, the Hydra in the lake at the end will start firing water projectiles that inflict large physical damage, if they land. The projectiles can be blocked by a great shield may not block resulting splash that comes from the projectiles, which can occasionally deal decent damage; dodging the projectiles and fighting the Crystal Golems simultaneously is not ideal, so you're better off pulling them away. 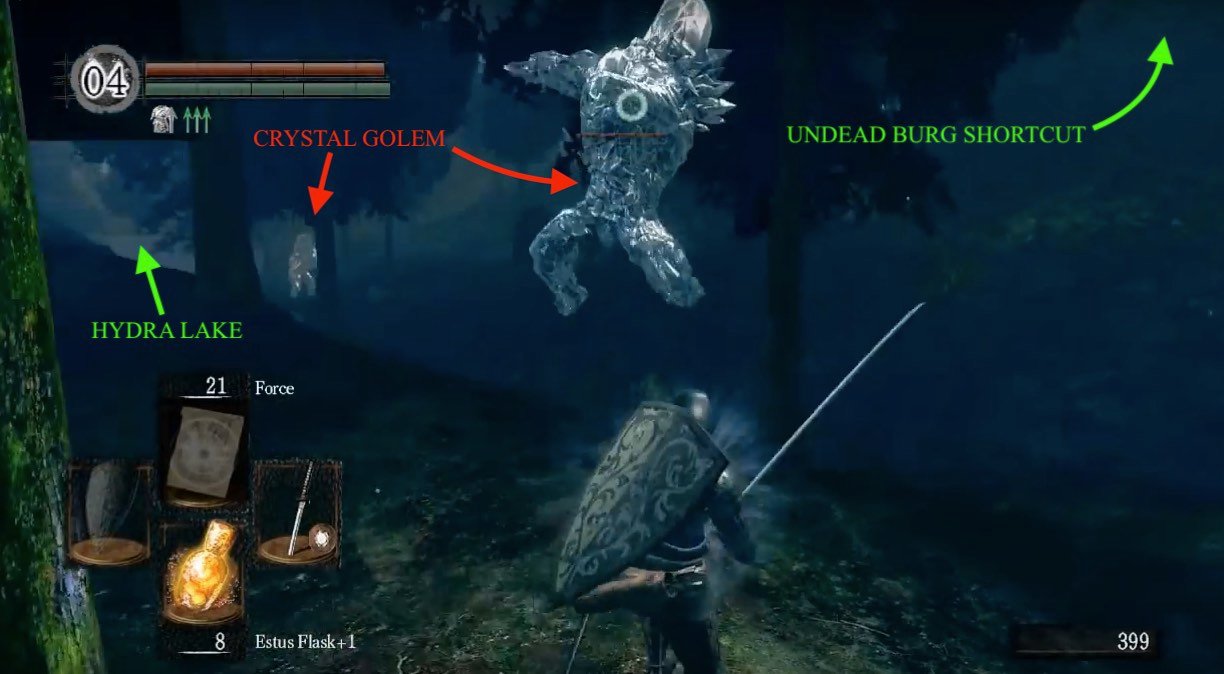 Sly Fox - Alternatively, if your weapons are ineffective against the Crystal Golems but you have enough movement speed, you can engage them enough so they chase you then manoeuvre around, baiting the water projectiles onto the Crystal Golems, making good use of your environment for cover and cheeky escapes; they seem to only be able to take 1-2 hits from the projectiles before they die, on the first playthrough. Once you have disposed of them, make your way to the Hydra as quickly as possible. For further strategies on the Crystal Golems, visit their page.

A Snake With Many Heads - At the lake, you may be tempted to take the fight to the Hydra, but treading too far into the lake will drop you into the Abyss. Avoid this, and stay close to the shoreline, and wait for the Hydra's heads to attack; when they do this, the heads stay on ground level for a couple seconds before winding back up for another attack - take advantage of this and cut their heads off until there aren't anymore to cut off. 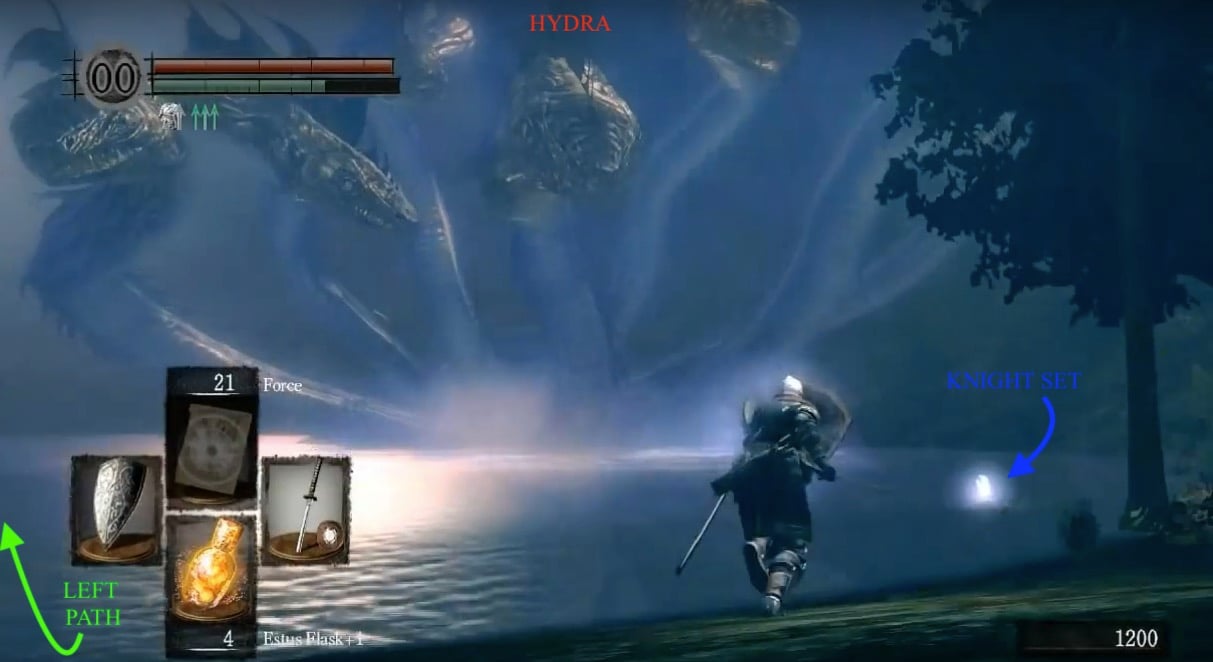 Golden Hard Man - Once you defeat the Hydra, not only will you be rewarded with a Dragon Scale, a Dusk Crown Ring, and 5000 Souls, but you can also pick up the item on the shoreline of the lake. This is the Knight Set. There is a path through the left side of the lake you can walk through which starts at the waterfall and crosses over to a small piece of dry land with a long ladder going up the cliff face on the left - we'll come back to this ladder in a moment. Keep following the wall on the left through the water and towards the end you should be able to see the Golden Crystal Golem. Equipping the Rusted Iron Ring is very helpful in the incurring fight to improve mobility in the water. This golden variety of the Crystal Golem is essentially a larger, more power version of than the ones you faced earlier - if you thought the four earlier were hard, you're in for a rough ride. (If the Golem does not appear after you kill the Hydra, return to the ladder & waterfall area, quit & reload the game & then try again) 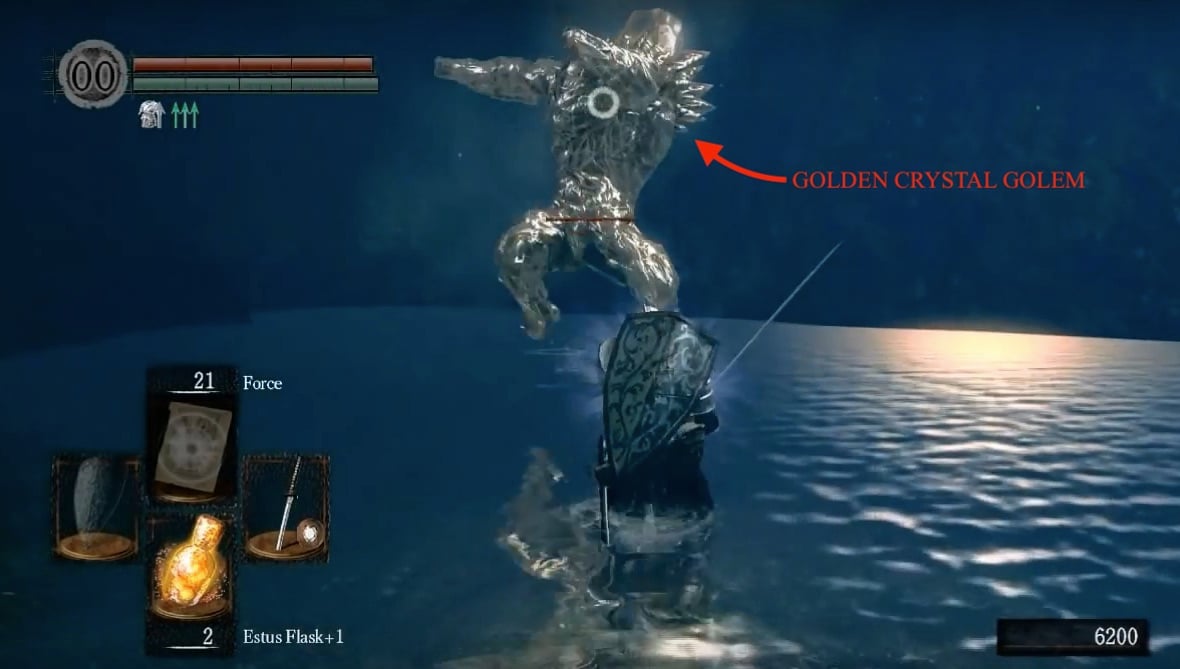 From Dusk Till DLC - Once you defeat it, Dusk of Oolacile will appear in it's place. She will thank you for saving her, give you some backstory and offer her assistance - say 'Yes' to whatever questions she asks. Once done, her summoning sign should now appear next to a rock in front of the lake where you fought the Hydra. Using it you will be able to summon Dusk here where she'll serve as a sorcery trainer, but be sure to only do so without other enemies in the vicinity as she can become collateral damage. If you return to the spot where you fought the Golden Crystal Golem now you will find the Antiquated Set - if not, a cheeky quit-and-reload is in order. (You need to summon Dusk first for the set to appear.) Saving her is also the initial trigger event for accessing the Prepare to Die/DLC Oolacile content. 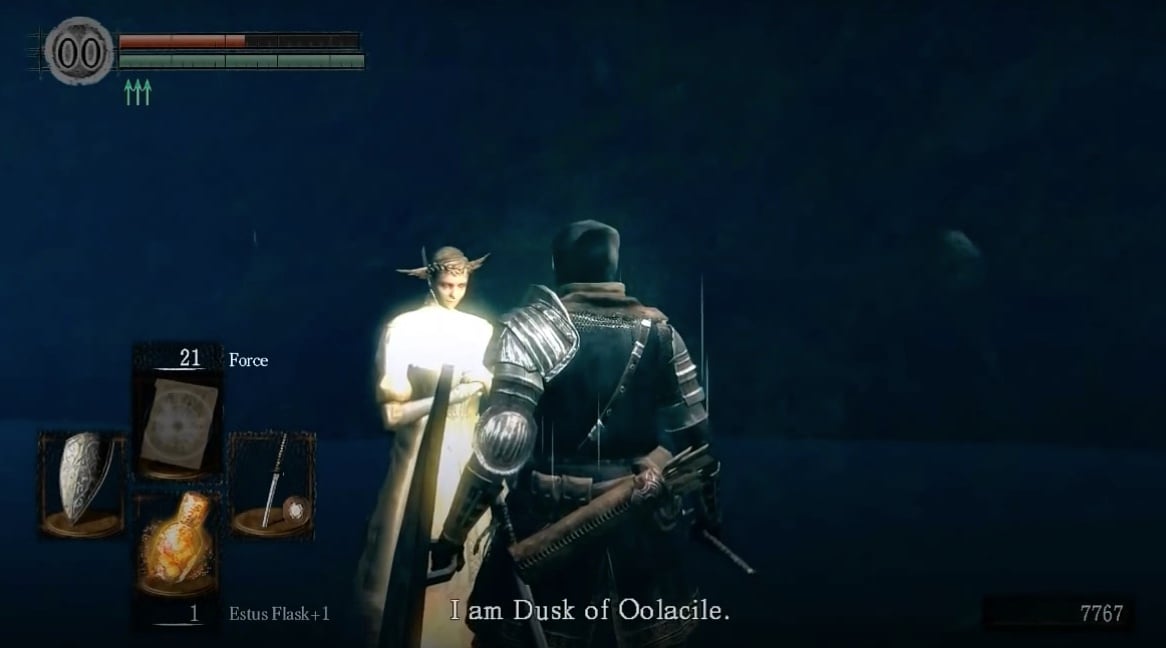 Remember the long ladder beside the waterfall on the left side of the lake? Well a climb up this ladder will bring you to the stone bridge leading to an encounter with the Giant Cats in Darkroot Garden.

Once all the above is complete and if you have no further business in Darkroot Garden, the next stop is New Londo Ruins via Firelink Shrine.