Forest Hunter is a Covenant in Dark Souls, popularized for its anything-goes pvp action.

You can join this covenant in the dark forest (in one of the towers joined by a bridge, past the sealed gate) by talking to the huge cat referred to as Alvina of the Darkroot Wood. Joining this covenant will result in Alvina giving you the Cat Covenant Ring, which she will use to summon you when other players, who aren't part of the Forest Hunter covenant, journey into the first part of the forest.

Having the ring equipped essentially puts you in a queue for PvP. When a non-Forest Hunter enters the area you will be summoned to "invade" them. It is possible for more than one Forest Hunter player to be summoned to invade a single trespasser (maximum of one other invader). You do not have to remain in the forest for it to work and you do not have to be in human form, though you do need to have it equipped.

Defeating a trespasser will often gives you a random titanite shard/chunk excluding red chunks (note that you do not need to land the killing blow to be credited with a victory). If the enemy is killed, you are returned to where you were standing upon being summoned and all of your spells and miracles are refilled. If you are killed, you are returned to the last bonfire you rested at, but do not lose any souls, humanity, or items. Defeated trespassers may use an Indictment on you if they possess any.

Killing any hostile creatures in the area (i.e. anything you can target) does not seem to affect your covenant status, though attacking Alvina, Shiva and any of the non-hostile NPC hunters will result in the breaking of the covenant. It seems that walking or rolling into one of the hunters in the forest can be counted as a betrayal, prompting them to ban you from the covenant and begin attacking.
This is the one and only covenant that has no betrayal penalties and also has the helpful effect of deflecting other betrayal penalties. If you join this covanent (after abandoning another without Oswald's help) you will not receive the penalties of leaving that previous covenant. However, if you get kicked out of a covenant, it will earn you a sin. (PvP Sin)

If you answer "No" to Alvina's first question she will refuse to speak with you until you absolve your sins with Oswald of Carim. Hitting Alvina (fists, spells, weapons) will result in the NPC leaving permanently. You will lose the ability to unlock the covenant and receive the achievement until NG+. 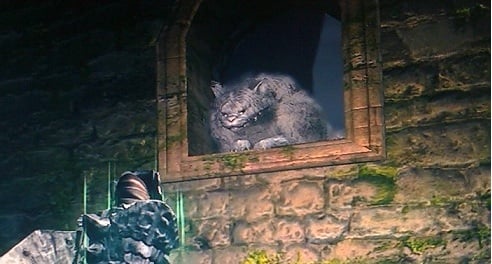 Reach Alvina at the Darkroot Garden, who stands just before the bridge linking to the ruined structure.
2. Accept covenant (choose "YES" for each questions )
3. Obtain a Cat Ring that will allow Alvina to summon you to defend the Forest.

Forest Hunters invade as a "Dark Spirit", but are blue. There are 3 spots to spawn as a Forest Hunter:

Each successful invasion gives a small amount of souls based on the Soul Level of the defeated player and a random item. Note: You do not have to kill the host yourself, all you have to be is alive in their world when they die to receive the reward (Souls and Item). A list of possible reward items is shown below :

Each successful defeat of a forest invaders is one point closer to a rank up. However, ranking up will net you no items, only a number.